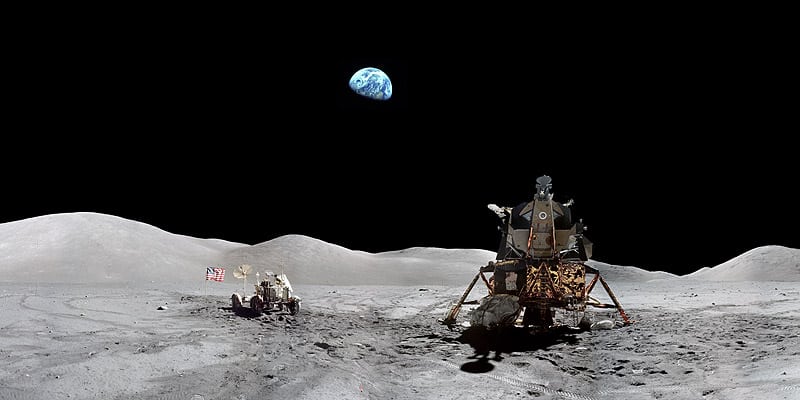 On the heels of a press conference regarding the proposed Space Force held earlier this month by Vice President, Mike Pence, NASA Chief, Jim Bridenstine announced his plan to send astronauts back to the moon…to stay.

Humans haven’t stepped foot on the moon since December 1972, and Bridenstine feels that’s far too long.

“If you go back to 2009, the United States, through NASA, made a critical discovery, which is the moon has hundreds of billions of tons of water ice. To me, that should have changed our direction immediately,” he said. “From 1969, when we first landed on the moon, up until 2009, a lot of people believed that the moon was bone-dry. So, the question is — during those 40 years, we missed that. What else have we missed?”

Water ice is exciting! Not just for the consumption of astronauts stationed on a future moon base, but as a possible fuel source. Because water is made up of hydrogen and oxygen, the hydrogen can potentially be extracted and used as a propellant for spacecraft.

Bridenstine also said he sees the moon as a way forward to points farther out in the solar system, and he’s not wrong. With the lack of atmospheric drag and lower gravity of the moon, spacecraft would need far less fuel to escape the lunar surface. This makes it an ideal launching platform to venture out to other worlds, like Mars.

But there are other benefits to lunar bases, as well.

“I think a lot of people miss the fact that the moon represents an amazing proving ground for all of the technologies and the human-performance capabilities that are necessary to survive on another planet and the ability to develop in-situ utilization abilities,” Bridenstine said.

What, exactly, are the newly appointed NASA Chief’s plans?

According to Bridenstine, the key is in building “Gateways”— small platforms in lunar orbit that will serve as outposts or transport points.

“The [first] Gateway is going to be in a near-rectilinear halo orbit. It is not optimum for getting to the surface of the moon, but it enables with a very low propulsion capability — we’re talking about solar electric propulsion — it enables us to stay in that orbit for a very, very long period of time,” Bridenstine said.

And that’s not all. Bridenstine sees potential for international use, both commercial and scientific, of these “Gateways.”

The NASA Chief made it clear, though, that the Gateway wouldn’t be another ISS. Rather, it would only be able to support humans for 30-60-day science missions, but not meant to house a permanent crew.

For more permanent settlements, like lunar bases, there is huge potential.

Recently, the European Space Agency announced their “lunar masonry” studies that are exploring the possibility of using dust from the moon’s surface as a building material for bases and other settlements on the surface.

Because the moon’s surface is made of basaltic material called silicates, ESA officials and researchers are analyzing volcanic material near Cologne, Germany that is a close match for lunar dust. And because lunar soil is made of 40% oxygen, researchers are also studying how to extract it for use by astronauts to extend their stays on the moon.

NASA has even been testing and improving on the powerful RS-25 engine designed 40 years ago to power the space shuttles.

When adding all these ideas and tests together the timing seems right for American’s to, once again, pioneer a new frontier.