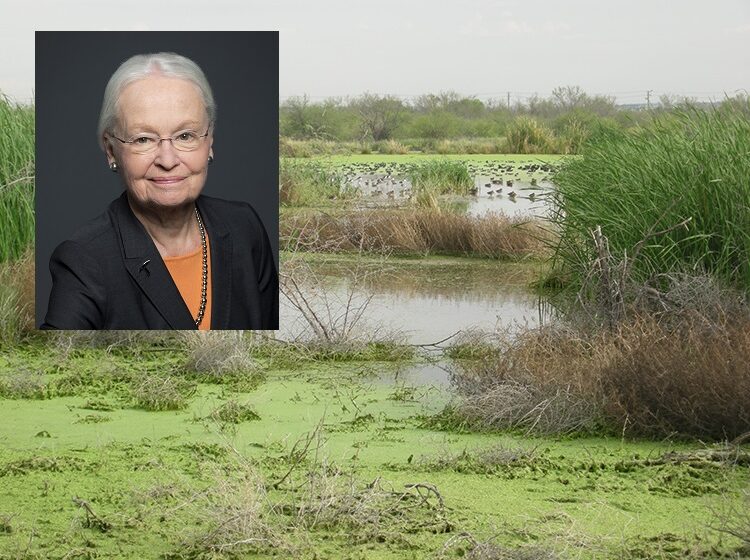 UTEP President Diana Natalicio is being recognized for successfully guiding the development of a wetlands park – an invaluable contribution to environmental conservation in the Paso del Norte region – by the El Paso/Trans-Pecos Audubon Society.

President Natalicio is a recipient of the organization’s Conservation Award, which honors her unflagging support of Rio Bosque Wetlands Park, a 372-acre City of El Paso park managed by UTEP’s Center for Environmental Resource Management (CERM).

The award recognizes UTEP’s efforts — under President Natalicio’s leadership — to conserve and sustain Rio Bosque, which is an example of the wetlands and riverside forests that once graced the banks of the Rio Grande.

“I am honored and grateful to the El Paso/Trans-Pecos Audubon Society for recognizing my and UTEP’s commitment to the Rio Bosque Wetlands Park,” President Natalicio said.

“I became excited about the huge potential of this site from the moment John Sproul shared with me his vision for what it could become. As work began on its conversion, I continued to be very impressed not only with John’s deep and abiding commitment to the Bosque, but even more with his tenacity and tireless efforts to guide its transformation. Against all odds and despite some deeply disappointing setbacks, he simply never gave up. Thanks to his efforts, the Rio Bosque Wetlands Park has taken its well-earned place as one of the region’s most unique and valuable ecosystems. I extend thanks as well to so many colleagues and friends at UTEP and in the community who shared the Bosque vision and worked with John to make the dream of this precious regional resource come true.”

El Paso/Trans-Pecos Audubon Society leaders said President Natalicio was selected for the award based on the unwavering support the University has offered to Rio Bosque’s enhancement for more than two decades.

When the city needed support for the park’s development, President Natalicio embraced the challenge. In November 1996, the El Paso City Council approved a long-term agreement with UTEP to begin work to establish the park.

Subsequently, President Natalicio was instrumental in securing multiple grants to support the Rio Bosque project in 2001 and 2002.

Her leadership was key in advancing successful outcomes with community partners as well. Fostering these relationships helped initiate the installation of a turnout to the park from the Riverside Canal in 2013 and the first deliveries of irrigation water to the site in 2017.

“In addition to an educational and recreational asset to the community, the park has been a valuable asset to our teaching programs, specialized training opportunities for students, and student research,” said William Hargrove, Ph.D., CERM director.

The award was presented during the El Paso/Trans-Pecos Audubon Society’s annual banquet Saturday, February 16, 2019, at the Hyatt Place in Central El Paso.