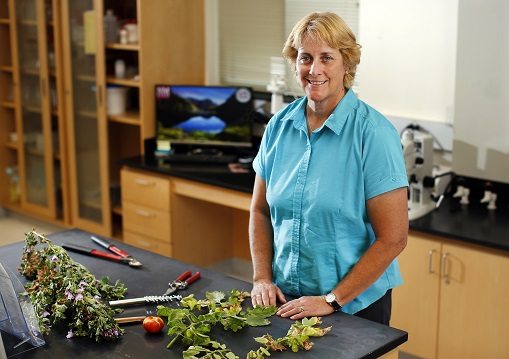 When Natalie Goldberg joined New Mexico State University as an assistant professor and Extension plant pathologist in 1993, she wasn’t thinking about becoming an associate dean in the College of Agricultural, Consumer and Environmental Sciences someday.

She was focused on plants. Whether it’s identifying a plant pest or determining the best pest management strategy, she loves working with plants.

After all, she earned both her doctorate and master of science in plant pathology from the University of Arizona after receiving a bachelor of science in ornamental horticulture from Cal Poly Pomona.

On July 1, Goldberg became the first woman to take the helm of the NMSU Agricultural Experiment Station. College of ACES Dean Rolando Flores announced in May that Goldberg would be the interim associate dean and director of AES.

“Dr. Goldberg has extensive experience in managing a very successful Extension department that is characterized by outreach and applied research,” Flores said. “Her approach reflects the integration we need to have, as a land-grant university, between Extension and research activities.”

The first 23 acres of land was purchased for AES in 1906. Today, the AES system accounts for 94,884 acres of land across New Mexico. Since 1907, AES has been under the direction of about 16 different male associate deans.

Just a few weeks into her new leadership role, there is no question about Goldberg’s top two priorities. She will analyze the budget and take part in a thorough review of all science centers.

“The budget is one of my primary responsibilities, so I need to make sure that we stay within our allocated amount of funding,” Goldberg said. “We’re in a time when we’ve had some cuts, and there’s not a lot of reserve funding. I need to figure out how to balance building the reserve funding, but continue maintaining and hiring faculty. My theory going into the next legislative session is that we are not likely to see increased funding. If we continue to receive cuts in our funding, we’re going to need to make some tough financial decisions.”

As far as reviewing all science centers, Goldberg will have some assistance. Prior to her appointment, Dean Flores had established an advisory committee of 17 members to assess each center and to analyze the AES system as a whole. The committee is comprised of six members from the agricultural industry, Goldberg, Associate Director of AES Steve Loring and four faculty members, one department head, two science center farm managers and two science center superintendents.

Goldberg said the committee has gathered plenty of background data on the centers.

“We need to look at how the centers are funded, where that money came from and how that money is being used,” she said. “Many of the centers were built on legislative support from their local constituency. For example, growers in the Artesia area were able to secure funding for faculty at that center.

“We’ll work with this committee to conduct a very detailed review of each of the ag science centers. What are they providing that’s unique to the system and that’s important to their area? How are they impacting the agriculture in the immediate area that they serve? What are they doing globally? What are their immediate and longer-term infrastructure needs? This overall review is very important, and it’s one of my first tasks.”

The committee had its first in-person meeting July 19.

In her new role, Goldberg would also like to focus on the connections among science centers, between science centers and the College of ACES and between AES and the Cooperative Extension Service.

“It’s not that the centers are operating independently, but I’d like to see even more connectivity,” she said. “There are certainly collaborations out there. And I’d like to see a more developed Extension–research connection.”

Goldberg also acknowledged that she is much more familiar with the plant science aspect and needs to learn much more about the animal science side.

She plans to explore partnership development between the science centers and the private sector in their communities. She has seen mutually beneficial partnerships formed between other universities and companies in the agricultural industry and said similar potential opportunities may exist for NMSU.

Although overseeing AES will be demanding, Goldberg is no stranger to challenges.

She took the NMSU Plant Diagnostic Clinic from a small desk in a tiny office with a couple of petri dishes and a salvaged microscope in 1993 to a fully accredited clinic by the National Plant Diagnostic Network last year. The only other labs with this designation are at Cornell University, the University of Florida and the Nevada Department of Agriculture.

She hopes to find the same type of success in her new role with AES.