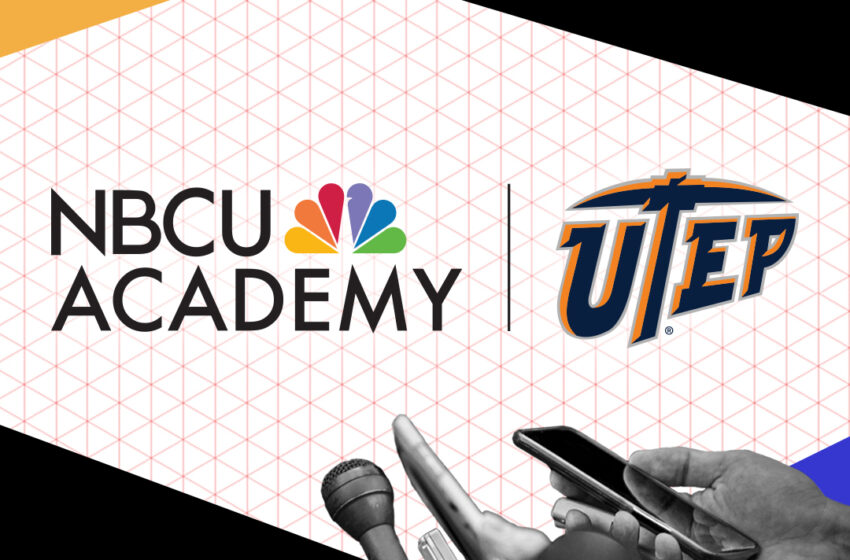 Communication students and faculty members from The University of Texas at El Paso will benefit from a new corporate collaboration with NBCUniversal News Group that will involve internships, training and development programs focused on diversity, equity and inclusion.

NBCUniversal News Group, which is comprised of NBC News, MSNBC and CNBC, announced January 14, that UTEP would be among the 17 higher education institutions from around the country that will participate in NBCU Academy, an inventive, multiplatform program that will help train and educate the next generation of journalists, content creators and newsroom leaders.

NBCUniversal News Group will provide $500,000 to the Department of Communication over the next two years. At least half of the funds will go toward 25 student fellowships that would help pay for internships.

Additionally, members of the NBCU Academy will offer on-campus and online training and development programming generated by the News Group’s Diversity, Equity and Inclusion (DEI) team.

UTEP President Heather Wilson said she was excited about the project’s scope and depth because of how it would positively affect students who want to be part of the communication field.

She added that this partnership was a testament to the quality of talent, courses and programs within the Department of Communication.

“We appreciate the partnership with NBCUniversal News Group to provide scholarships and valuable professional experience for our students,” President Wilson said. “Most of our students have grown up in a bicultural, bilingual community. We are confident that they will both benefit from and contribute to the telling of unique stories in relevant ways.”

The NBCU Academy is the latest effort by Comcast and NBCUniversal News Group to enhance diversity within news organizations. The news group has partnered with Hispanic-Serving Institutions and Historically Black Colleges and Universities that significantly serve minority populations to include Asians, Native Americans, people with disabilities and members of the LGBTQIA community.

In a welcome note, Cesar Conde, chairman of NBCUniversal News Group, wrote that he was thrilled to partner with UTEP and hoped that the collaboration would lead to a sustainable pipeline of talent from the campus to the media and technology industry. He mentioned how members of his DEI team were ready to work with educators on curriculum development, equipment needs and student funding.

“Creating an inclusive culture for journalism that represents the communities we serve is at the very core of what we do,” Conde said. “Through NBCU Academy, we have the opportunity to widen our extraordinary legacy by building on-ramps for a talented generation of journalists and storytellers who – for so long – may have been overlooked.”

NBCUniversal News Group will invest $6.5 million into the initiative, which Conde called “a center for journalistic excellence.” In addition to the student scholarships, equipment and academic collaborations, the program will involve journalists, executives and managers from NBC News, MSNBC, CNBC, and Telemundo as guest lecturers and mentors.

In June 2020, Comcast NBCUniversal announced a multi-year $100 million commitment to help address systemic racism and inequality. NBCU Academy is part of that pledge and focuses on providing tools, resources, and platforms for young, underrepresented voices.