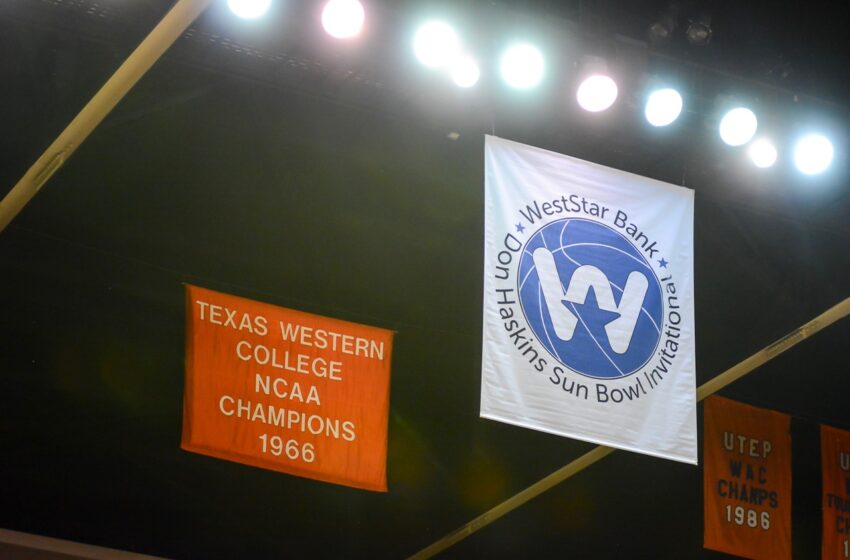 North Dakota State outscored UTEP 19-2 over the final 7:35 en route to a 63-51 victory in the WestStar Bank Don Haskins Sun Bowl Invitational championship game on Friday at the Haskins Center.

The Miners (5-7), who had their four-game win streak snapped, led 49-44 after Keith Frazier hit a jumper with 7:53 to go.  After that, North Dakota State (7-6) scored 14 unanswered points before Frazier ended the scoring drought of nearly seven minutes on a jumper with 1:06 remaining.

North Dakota State put the finishing touches on the victory at the foul line.  The Bison was 21-for-29 at the stripe on the night to UTEP’s 6-for-11.  More importantly NDSU clobbered the Miners on the boards, 50-30, and scored 13 second-chance points – including 11 in the second half when it got away from UTEP.

“It’s easy to see, and I just told the team, 50-30 on the glass.  You can’t win,” UTEP Interim Head Coach Phil Johnson said.  “We just got crushed.  I thought we defended them pretty good throughout the shot and we just couldn’t go clean the glass.  They shot 36 percent for the game.  That’s something we can live with.  And only eight turnovers.  It wasn’t all bad.  But that’s brutal.  We can’t rebound the ball.  Obviously getting Matt [Willms] back will help us, when that happens.  And Tirus [Smith] being in foul trouble really hurt us on the glass.  So we had four guards in there with Paul [Thomas].  But those guys are good.  They defend and they run good stuff and they’re hard to defend and we had a hard time getting good shots.”

Smith was limited to 17 minutes with foul trouble and finished with six points and four rebounds.  A.J. Jacobson and Tyson Ward spearheaded the Bison’s board work with 12 and 11 rebounds, respectively.

UTEP’s Keith Frazier posted his second double-double of the season with 18 points and 10 rebounds to earn a spot on the All-Tournament Team.  He averaged 20.5 points and 9.0 rebounds in the two Sun Bowl Tourney games.  Smith received the tournament’s Don Haskins Award.

Paul Thomas added 12 points and seven rebounds for the Miners on Friday.

Up until the stretch run it was an entertaining basketball game.  The Miners jumped out to a 19-8 lead.  The Bison came roaring back to pull within four (25-21) at halftime.  An 8-0 run by North Dakota State in the second half turned a 36-32 deficit into a 40-36 lead.

UTEP scored six unanswered to erase a 44-43 deficit and surge into the 49-44 lead, but may have run out of gas at the end while playing its third game in four nights.

“They just started driving,” Johnson said of the game-ending run.  “They really kind of abandoned their offense and just started putting their head down and driving it, and we started fouling.  And so they shoot 29 free throws to our 11.  They made 21 and we made six.  So there’s 15 points in addition to the rebounding, and that’s a big part of the game.”

The Miners shot 33.3 percent from the field, including 30 percent in the second half, and tallied only five assists.

Smith, who had scored 32 points in the previous two games, picked up his second foul at the 15:57 mark of the first half.  He was assessed his third foul with 17:43 remaining in the second half, and his fourth with 17:08 to play.

“We tried to play him with three and he picked up his fourth,” Johnson said.  “There was some confusion on did he have three or did he have four.  Well, he had four.  And so we took him out with four and he had to sit for a long period of time.  And with Paul in the game and Jake [Flaggert], we’re really thin and frail.  And they’ve got good players.  They shoot the ball very well, they go rebound it very, very well, and they have a well executed offense.  It’s hard to guard the stuff they run.  And I thought we did an excellent job man-to-man wise for about 36 minutes.  I thought we did.  They ended up with 63 [points], but the late free throws they knocked down, so you’re in the 50’s probably.  Something you can live with.  So our issue really wasn’t necessarily guarding them, it was rebounding and our inability to go score and I give them credit.  They just flat-out defended us very, very well, probably the best we have been guarded all year.”

The Miners will take a short holiday break before getting an early start to the Conference USA schedule by hosting North Texas on Thursday (Dec. 28) and Rice on Saturday (Dec. 30) next week.