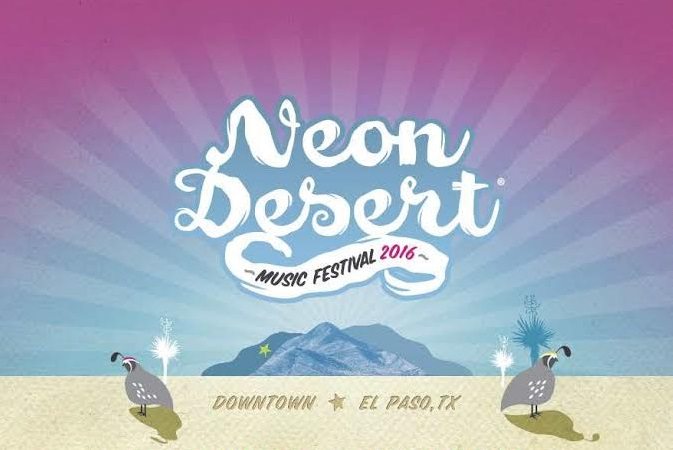 Neon Desert Music Festival is excited to announce the full music lineup for the sixth annual event, which is slated to return to downtown El Paso on Memorial Day weekend, May 28 and 29.

Weekend two-day passes are on sale now at www.neondesertmusicfestival.com, as well as at all El Paso and Las Cruces Mattress Firm locations.

Taking place over 15 city blocks in the heart of downtown El Paso encompassing two city parks, Cleveland Square Park and San Jacinto Plaza, Neon Desert Music Festival will proudly welcome headlining performances from EDM pioneer and one of the top DJ’s in the world, Tiësto, who is sure to bring the party to El Paso all night long; along with acclaimed American rock band Deftones, who will be performing in support of their new album, Gore, set to be released this April.

Additional headliners include Future, who will be performing in support of the two acclaimed hip-hop albums he released earlier this year, Purple Reign and Evol; as well as international reggaeton sensation Daddy Yankee and DJ/producer Carnage, who will be bringing special guests to the weekend-long celebration.

Some of today’s biggest hip-hop artists will also be there to make sure the energy is high throughout Memorial Day weekend with performances from Ludacris; Tyler, The Creator; a special collaboration between A$AP Ferg & Tory Lanez, and many more.

Neon Desert will once again offer an eclectic mix of mainstream American performers alongside acclaimed international acts at this year’s event. Over the past five years, Neon Desert has hosted over 100,000 attendees, as well as a variety of internationally renowned talent, with the likes of J. Cole, Kaskade, Passion Pit, Zoé, Ximena Sariñana, Mala Rodríquez, G-Eazy, Zedd, Wiz Khalifa, MGMT, Capital Cities, Carla Morrison, and Moby having previously played at the festival.

Neon Desert looks to make this year’s event bigger and better than ever with a wide variety of stellar music acts set to perform over three stages, along with a silent disco stage, multiple live art installations, and numerous local food vendors and merchants.

Weekend passes now on sale at www.neondesertmusicfestival.com, in addition to all El Paso and Las Cruces Mattress Firm locations. Passes to the two-day event are only $119 while VIP passes are just $250 until the day of show. VIP ticketholders will be able to partake in the utmost festival experience at Neon Desert with more details on the VIP ticket packages coming soon.

For more information on the festival, go to www.neondesertmusicfestival.com. Follow Neon Desert Music Festival at facebook.com/neondesert, on Instagram at @ndmf, on Twitter at @neondesert, and on Snapchat at @neondesert on for updates and special promotions.

If We Were Turtles / Kilo and the Dew / Mr. Crazy