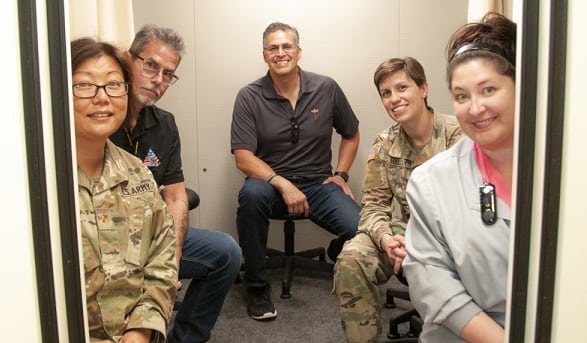 The hearing booth will allow Soldiers assigned to the clinic, approximately 5,700, to conduct hearing exams near their Area of Operations while relieving congestion at other clinics through the Fort Bliss footprint.

“The brigade here was going to (Spc. Hugo V. Mendoza Soldier Family Care Center), this will alleviate the strain of trying to get everybody into that one clinic,” said Capt. Lydia Malloy, an audiologist and chief of the Fort Bliss Army Hearing Program. “Access to care is going to be better, hearing readiness is going to be better, all around a good thing.”

According to the Army Public Health Command, Soldiers may be subject to impact noise topping decibel (dB) levels at 175 – 180 dB, a range well above the safe limits of 85 dB for continuous noise and 140 dB for impact noise.

“The reason for the Army hearing program is to prevent noise-induced hearing loss, if we can identify shifts (in hearing capability) early then we can change the behavior to keep it from becoming a problem,” said Malloy. “Eventually that problem may affect someone’s career when you hit a certain point.”

The East Bliss Clinic offer a full spectrum of services from dental to behavioral health but has lacked audiology services since opening its doors six years ago.

“(The addition of the booth) will allow Soldiers to complete their physicals, enhance medical deployability while facilitating a much needed service within walking distance and in their medical home,” said Jackie Beard, clinical nursing officer in charge, East Bliss Health and Dental Clinic. “The booth will also alleviate some of the demands on the other test sites and meet missions.”

The eight-station booth joins two other hearing conservation booths already in use in other primary care clinics throughout Fort Bliss.

According to Malloy, survivability and lethality also drive hearing conservation amongst Soldiers, to maximize human potential during stressful situations such as combat.

In addition to safeguarding Soldier’s hearing, the new addition to the clinic also improves unit readiness by reserving more time for mission requirements in lieu of medical examinations.

“This booth will have a positive effect on Soldiers’ clinical needs, the installation and overall missions,” said Beard. “We are always forward thinking with new innovative ways to deliver excellent clinical care to our soldiers.”