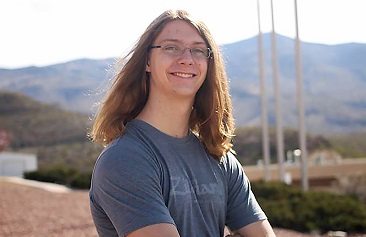 Each year, the walkways on the New Mexico State University campus fill with a new class of eager freshmen.

Since 1978, that freshman class has included a select group of students who come from all over New Mexico and have earned one of the institution’s most prestigious awards, the President’s Associates Scholarship.

The President’s Associates Scholarship, established by late NMSU President Emeritus Gerald Thomas, was the first leadership-initiated giving program, created as a way to honor some of the best and brightest in New Mexico.

The program seeks out select freshmen enrolling at NMSU directly from New Mexico high schools. These high schoolers have not only excelled in academics, but have already sought out ways to make their communities better. This year’s class of PA Scholars includes 15 students from around the state.

Las Cruces Centennial High graduate Danae Melón said the final push for her to stay in New Mexico was the offer of the PA Scholarship.

“My last few years in high school I really thought about how it would be good to stay here and build a foundation using the excellent education I could get at NMSU,” Melón said. “The PA Scholarship gave me everything I could have needed to know I was making the right decision.”

Melón looks to go into microbiology, with her eyes on medical school in the future.

“I’m thankful for donors providing me this opportunity because I’m not sure where I would have ended up,” she said.

Incoming Aggie freshman Connor Draney hails from La Luz, New Mexico, and is excited not only to double major in biology and microbiology, but also to join the Pride of New Mexico, the NMSU marching band as a percussionist.

Draney has been busy in high school, too. A National Honor Society member, Draney went to All-State for three years and became a Boys State representative in his junior year and a Boys State Junior Counselor in his senior year. To top off all that, Draney is also an Eagle Scout.

“I never really wanted to go far away for school, and my mom is pretty relieved about that,” Draney laughed. He knew that he really wanted to go to NMSU, with which he was already familiar, and applied for the PA Scholarship as soon as it became available.

“An NMSU representative came to the awards ceremony at school, and he listed each scholarship and winner,” said Draney, whose proud parents were in the audience. “My award came at the very end, with the representative saying that he’d need to take a minute to explain how special this scholarship is.”

The President’s Associates Scholarship covers the full cost of tuition, fees and housing, plus an additional annual stipend of $3,250 for other educational expenses. The NMSU Foundation and PA Board of Directors are continually working to build the scholarship’s endowment with additional gifts from donors.

This year’s fundraising initiative for the scholarship was the PA Virtual Ball, which featured an online auction of VIP experience packages, opportunities to attend privately hosted mini-dinners in Las Cruces, Albuquerque and Phoenix, and even items like fine art and concert tickets. The items came from generous donors and local businesses.

It’s donor support that starts their journey, but Draney has already noticed the support coming from NMSU before he’s even on campus for the fall. “They’ve already contacted me to explain the resources available to me in the Honors College,” he said.

Draney is grateful for the opportunity to come to NMSU and looks forward to proving himself to those who gave to the scholarship fund. “I want to just thank donors heartily for their gifts, and that they can feel secure that I will use the funds well,” Draney said.

“For nearly 40 years, President’s Associates Scholarships have provided outstanding and motivated New Mexico students with the financial support necessary to allow them to reach their potential, and encouraged them to use their talents here in New Mexico,” said Andrea Tawney, president of the NMSU Foundation. “Current PA Scholars are a diverse group from disciplines all over campus, and they share a common goal – a sincere desire to serve their communities and to create positive change in our world.”

The PA Virtual Ball fundraiser netted more than $57,000 to support the scholarship recipients, thanks to generous donors and businesses, and was part of the NMSU system’s $125 million “Ignite Aggie Discovery” campaign, which extends through 2019.

The fundraising effort, which launched its public phase in April, is the largest cash campaign in the university’s history, with a goal of adding $50 million in scholarship endowments to support student success. To learn more about the Ignite Aggie Discovery campaign, visit ignite.nmsu.edu.