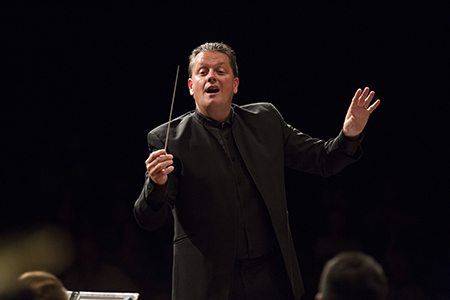 Nobody would have faulted Bradley Genevro if he had limited his time this fall to getting acquainted with UTEP as the new director of bands.

In that role he oversees the band program, including three concert bands, the marching band and the pep band. He has some big shoes to fill with the retirement of Ron Hufstader in May 2016, who had been director of bands since 1976.

But Genevro, DMA, has filled up his non-UTEP schedule with appointments at El Paso-area high schools to observe and critique their marching bands.

“When I go out to a school, the director hands me the microphone, I introduce myself, and they’ll go through a rehearsal,” Genevro said. “I’ll comment to their staff about things I think they can do better and some things that are going well.”

“It’s great to have someone of his caliber tell the kids where they are performance-wise,” Allen said. “He is able to relate to them on their level.”

“For me, it’s huge because I’m still a relatively new teacher and I’m relying on people who have been successful in their own right,” said Torres, who is in her third year as band director. “It’s important to pick their brains because I’m trying to push us to new territory.”

Genevro is active as a guest clinician, conductor and recording producer for groups around the world. He has worked in the U.S., China, Australia and England.

He also has spent time teaching at the University of North Texas and Oklahoma University. Genevro served as the music director of the Philadelphia Wind Symphony for three years prior to moving to El Paso.

In addition to his faculty responsibilities at UTEP, Genevro will be keeping up his conducting chops as a guest conductor across the country, including Delaware, Oklahoma, Pennsylvania and Texas. He is spending a week in Hong Kong in December as a guest clinician, adjudicator and conductor for the largest band festival in Hong Kong.

Back in El Paso, now that marching band season is over, Genevro works with the schools’ concert bands. He planned to visit all of the area high schools in the fall and will visit middle schools in the spring.

“It’s important from a recruiting standpoint,” Genevro said of creating a rapport with school band staffs. “If people don’t know you, they don’t trust you. If they don’t trust you, they’re not going to send students to you to train. So part of it is me going out and meeting these folks and developing some communication.”

Genevro also would like to get more exposure for UTEP’s bands, faculty and the program to recruit more students from other areas of Texas and around the country. This includes more performances on campus by guest conductors, where audiences can experience the bands and spread word to others.

“The marching band is the face of the (music) department and the community,” Genevro said. “One of my goals is to do a ‘Bands in Review,’ maybe next year in November, after the marching season is over. It would be an indoor concert in the large auditorium where the marching band plays the second half but the first half might be the jazz ensemble and the wind ensemble. So folks might come to see the marching band and will realize there are other ensembles on campus.”

Genevro also would like to create a YouTube channel for the music department to make some of the performances available online.

Genevro and a committee have started the process to create on online master’s degree in conducting, with two-thirds of the program online and the other third offered through intensive summer courses. The degree plan could be up and running as early as 2018.

Department of Music Chair Steve Wilson, DMA, is excited about the experience Genevro brings to the department.

“He has proven to be a leader and is helping to restructure recruitment practices and reshape our graduate program to include online education opportunities,” Wilson said. “His connections in the music world are far reaching and are destined to be a real asset for our majors as they seek networking opportunities after graduation.”