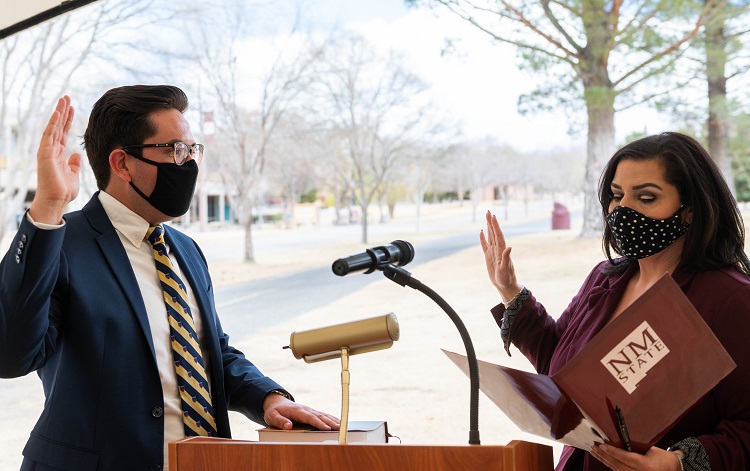 This week, New Mexico State University Board of Regents bid farewell to one of its members and welcomed a pair of new and familiar faces who joined the university’s governing body.

Christopher T. Saucedo and Neal Bitsie were confirmed to the five-member board earlier this month by the New Mexico Senate, following their appointments by New Mexico Gov. Michelle Lujan Grisham. Tuesday marked their first meeting with their fellow regents, Ammu Devasthali, Dina Chacón-Reitzel and Arsenio Romero, who were previously appointed by Gov. Lujan Grisham and will continue to serve on the board.

Saucedo, who takes over the position held by Debra Hicks, will also serve a six-year term. As the student regent, Bitsie will serve a two-year term, replacing Luke Sanchez.

Bitsie, who is pursuing a bachelor’s degree in engineering physics with a supplemental major in applied mathematics and a minor in aerospace engineering, took his oath of office Tuesday at Regents Grove on the Las Cruces campus before the board met for its meeting. Doña Ana County Clerk Amanda Lopez Askin, a former NMSU student regent and NMSU alumnae, administered the oath of office to Bitsie.

Saucedo, who previously served as an NMSU regent from February 2018 to February 2019 as a recess appointment by former New Mexico Gov. Susana Martinez, took his oath of office before Tuesday’s meeting in Albuquerque.

“I am excited to welcome Christopher Saucedo and Neal Bitsie to the Board of Regents and look forward to working with all the regents in the coming year,” said Devasthali, who was named regent chairwoman Tuesday. “We are not yet out of this pandemic, and there is much work to be done. I am confident all the regents are ready to roll up their sleeves and get to work helping the entire New Mexico State University system emerge stronger and better.”

Chacón-Reitzel and Romero will serve as the board’s vice chair and secretary/treasurer, respectively.

During his time at NMSU, Bitsie has served as the chief elections officer for the Associated Students of NMSU and helped implement ASNMSU’s first fully online election. He also served as an ASNMSU Supreme Court associate justice and expects to graduate from NMSU in 2022.

A Doña Ana County native, Saucedo graduated from Gadsden High School and earned a Bachelor of Business Administration from NMSU. He later received a law degree from the University of New Mexico School of Law. Today, he practices law throughout New Mexico and West Texas, specializing in commercial litigation, employment law and complex civil litigation.

In a farewell gesture, the board issued a proclamation Tuesday commemorating Hicks and her many contributions to NMSU over her six-year term. Hicks also participated in a traditional tree-planting ceremony in her honor at Regents Grove.

Hicks, who has a bachelor’s degree in engineering from NMSU, began serving on the board in March 2015.

During her term as chairwoman of the board, Hicks provided incomparable leadership when NMSU experienced significant budget reductions that drove restructuring and institutional efficiency efforts. Her focus on achievement resulted in a changed institutional narrative centered on student success. Through her decisive leadership, Hicks challenged the status quo and embraced national best practices in strategic repositioning, setting NMSU on a path for growth for years to come.

“Debra served with the highest level of passion, dedication, resolve, and integrity,” the proclamation reads. “She always put the university above herself and, despite great pressure, she consistently did the best for NMSU and its many stakeholders.”

The board also issued a proclamation memorializing the legacy of the late Karen Trujillo. Trujillo, a passionate researcher and advocate for New Mexico students and educators, tragically died on Feb. 25. Her husband, Ben Trujillo, and their daughters, Taralyn and Tavyn, attended a small gathering at Regents Grove, where Romero read the proclamation.

“(T)the legacy created by Dr. Trujillo through her character, research, and leadership will continue to have an impact on NMSU and the state of New Mexico for years to come,” the proclamation reads.

Trujillo earned three degrees – bachelor’s, graduate and Ph.D. – from NMSU in secondary education, mathematics, and curriculum and instruction, and was an avid Aggie sports fan. She was instrumental in establishing Educators Rising New Mexico in the College of Education in 2015 and developed the STEM Outreach Alliance Research, or SOAR, Lab, in 2016, which has since grown into the Southwest Outreach Academic Research Evaluation & Policy Center.

Trujillo also served as the interim associate dean of research in the College of Education and maintained her deep connection to NMSU even after her appointment to lead the New Mexico Public Education Department in 2019. At the time of her death, Trujillo was the superintendent of the Las Cruces Public Schools.

The board later recognized the outgoing NMSU Employee Council chair, Letty Gallegos, and her successor, Joseph Almaguer. Tuesday’s meeting opened with a rendition of the national anthem by NMSU undergraduate and rising country singer Dzaki Sukarno, who recently competed on “American Idol.”