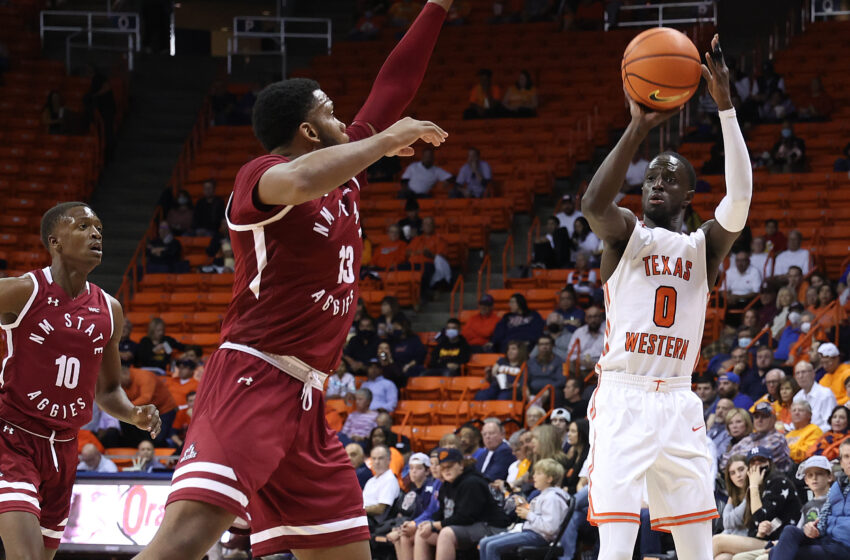 In the latest edition of the Battle of I-10 the UTEP Miners Men’s Basketball Team came out on the losing end losing to the New Mexico State Aggies by the score of 72-69 Friday night at the Don Haskins Center.

With the win the Aggies have swept the series for this basketball season in this heated and storied rivalry.

The game winning shot was taken by Jabari Rice, a three pointer from the top of the key with 1.6 seconds left in the game to give the Aggies their sixth win of the season. The game was projected to be a close one as is any rivalry game, this one came down the wire giving the 6,300 fans in attendance quite the thrill.

It was a game where the Miners fought back on more than a couple of occasions to tie game and take the lead, unfortunately easy points in the paint for the Aggies in the closing minutes were key in the victory for New Mexico State.

After the game a dejected Souley Boum and Jamari Sibley spoke with the media. Both were of the same disposition alluding that their defensive effort could have been better and that could have been the difference in this game.

Boum said, “We played hard, we did everything possible to keep ourselves in the game. Credit to my teammates they fought, fought and fought. It’s a really tough way to go out and lose like that.

Sibley, who had 18 points and seven rebounds said the following regarding the atmosphere at the Don Haskins Center, “The was my first big college game with fans. Last year at Georgetown, because of COVID, it wasn’t like that. The energy in the arena was definitely amplified.”

For UTEP head coach Joe Golding, the difference in the game was UTEP’s inability to get stops and crucial parts of the game. Golding said, “I think they scored like on nine straight possessions in the second half. Obviously we pride ourselves on defense but we couldn’t get a stop…we didn’t execute.”

Golding added, “Credit to them, they have a veteran team and they executed late in the game and got good looks. I’m proud of our guys, we fought and dug ourselves out of a couple of holes, we executed the game for the most part.”

Up next for the UTEP will be a couple of road games next week. On Tuesday they will face the Kansas Jayhawks and Sunday they will go up I-35 to visit the New Mexico Lobos in the Pit in Albuquerque. Two tough road games for the Miners to say the least.