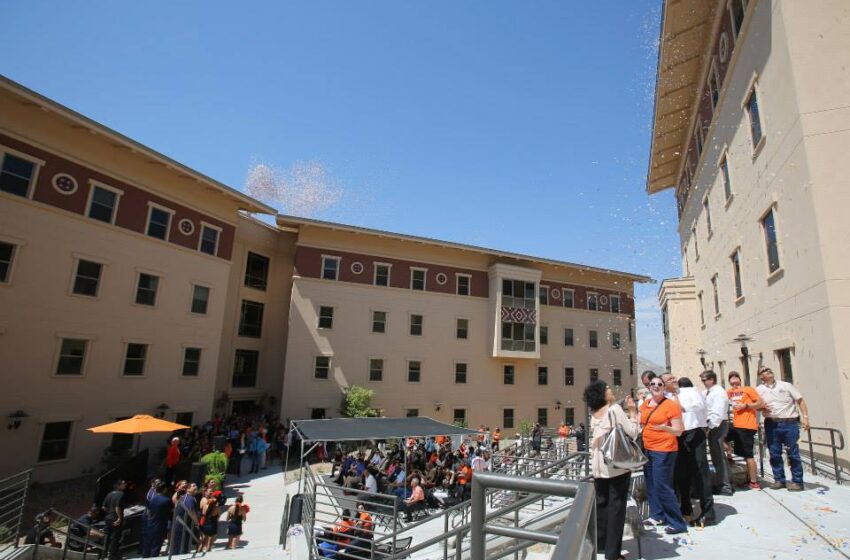 Miner Canyon, the most ambitious student housing community in the history of The University of Texas at El Paso, opened its doors officially during a ceremony Monday morning.

The complex,  located at 3490 Sun Bowl Drive, cost $23 million and is located on 6.2 acres bordered by a winding arroyo on the north end of campus. 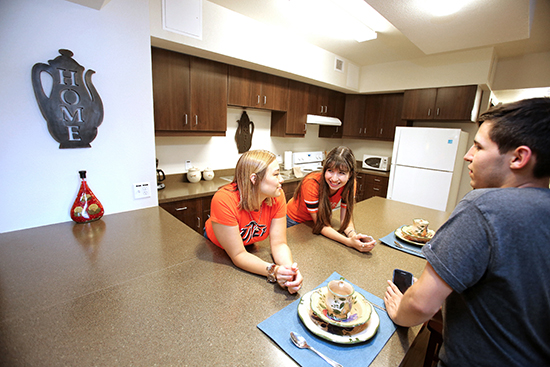 The two four-story residential buildings – the boomerang-shaped Copper Hall and Whispering Springs Hall – will accommodate 352 students in 83 apartments that come in several designs from one room efficiencies to four-bedroom suites that house six people.

The new campus community boasts a robust hard wired and wireless technology, but officials are just as excited about the interior layout that promotes peer engagement, said Catie McCorry-Andalis, Ed.D., associate vice president and dean of students. She spoke of the research that showed how campus living enhances student engagement and academic success.

“One of the most important aspects will be the sense of community,” McCorry-Andalis said. “Students residing in Miner Canyon will not only experience one of the most technologically advanced buildings at UTEP, but will acquire the confidence and experience to be engaged campus citizens who will make a positive impact on the global community.”

McCorry-Andalis said there has been an increasing demand in recent years at UTEP for on-campus housing that is affordable and accessible to academic resources and group activities. This complex is an example of the University’s commitment to enhancing student life, she said.

Construction of the 103,606 square-foot complex began in spring 2014. The design combined the latest research into student housing and features requested through UTEP student surveys.

Among the highlights of Miner Canyon is its state-of-the-art audio visual package that includes Wi-Fi and Internet Protocol television that allows residents to record and replay shows at their leisure. Boquillas Hall will have 5.1 surround sound, three 55-inch high-definition televisions and a retractable 139-inch projection screen.

The living areas have vinyl flooring and textured walls, the cabinets have dark wood veneer, and the bathrooms have tiled floors and showers. Each room comes with a bed, desk, desk chair and three-drawer chest. The bedrooms, apartments and buildings are secured with self-locking doors that only can be opened with a resident’s Miner Gold Card.

The residence halls’ common areas – centrally located lounges and corner study rooms – are among the campus’ best wireless access points. Students can hook into the 48-inch video screens during impromptu meetings for fun or academics. When not in use, the screens default into UTEP Today message boards. The study areas, or “collaboratories,” also have movable furniture so students can create their own workspace.

Each residential building will have laundry facilities on the second and third floors. Miner Metro shuttle service will give students convenient methods to get to class.

“This is state-of-the-art student housing,” said an enthusiastic Charlie Gibbens, Ed.D., director of UTEP’s Office of Residence Life. “We researched the design and the layout and it correlates with student success, and then there’s all that technology.”

Victor Gonzalez, freshman mechanical engineering major, is among the students hired to work at Miner Canyon. The future desk attendant said he is excited with the opportunity.

“It’s really modern,” he said while working the desk at Miner Village, UTEP’s housing complex that opened in 2001. “I like that it will be tech savvy.”

He has heard other students rave about the complex’s technological capabilities and contemporary dorm-like design. The University’s other housing communities, Miner Village and Miner Heights, which opened in 2010, are similar to apartments. The opening of the new complex brings the number of students living on campus to nearly 1,000.

The complex’s first residents were scheduled to move in starting Saturday, Aug. 15. Among them are the 15 recipients of the Terry Foundation scholarships.

The Terry Foundation works to improve and develop the State of Texas by providing full scholarships to outstanding high school graduates who attend the state’s top public universities. Yvonne Moody, the foundation’s executive director, is scheduled to make some remarks during the ceremony.

University officials said they are in the early stages of creating a neighborhood master plan that would add residential halls and a possible dining facility around Miner Canyon.