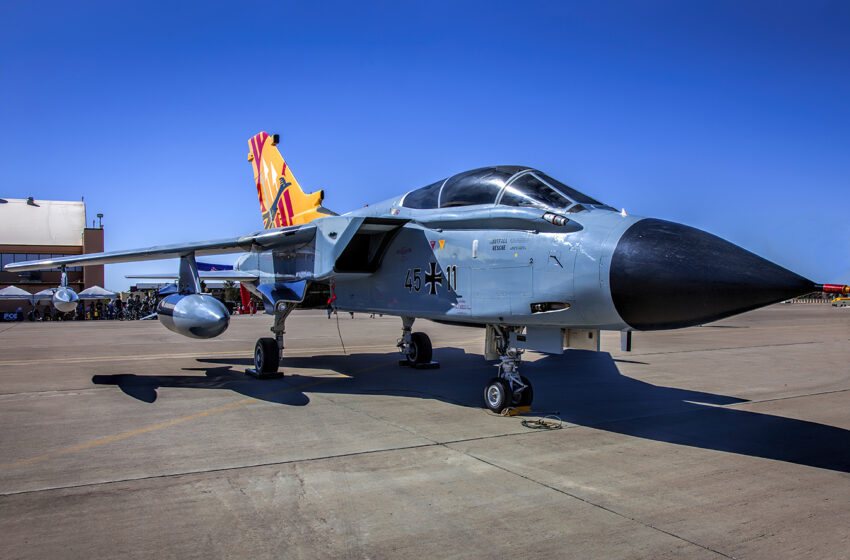 On Wednesday, officials with the New Mexico Museum of Space History announced the acquisition of a German Air Force Tornado fighter jet.

“We are thrilled to accept this aircraft on behalf of the German Air Force,” said Museum Executive Director Chris Orwoll. “It will serve as a constant reminder of the many years our German friends were a part of our community. We will certainly miss them, but we’re very glad to have this as a symbol of their continuing friendship.”

It will become one of three of the Panavia Tornados on display to the public in the United States. The other two are on display at the National Museum of the United States Air Force, Wright Patterson AFB, Ohio, and at the Pima Air and Space Museum in Tucson.

The twin engine, variable-sweep wing combat aircraft has been on display in front of the German Air Force Headquarters at Holloman Air Force Base for the last several years. The vehicle’s tail is painted in New Mexico colors, with a roadrunner and partial Zia symbol prominently featured.

The aircraft is slated for permanent display on the grounds of the museum; however it will have to be moved from its current location inside a hangar at Holloman Air Force Base first. Johnny Powell, new Executive Director of the International Space Hall of Fame Foundation, is spearheading that move. Desert Sun Motors is the lead sponsor for the move.

“At a little over 56’ long and nearly 20’ high at the tail, the move of the Tornado does present a few logistical challenges,” said Powell.  The move is planned for January 12, when the first leg of its journey will take the aircraft from Holloman to the Otero County Fairgrounds.

“We’ve had incredible support from the GAF and Holloman, along with city, state, and county entities as we’ve been planning this move,” said Powell. In addition, many local businesses have come on board to help with the move.

The ISHF Foundation and Museum of Space History are planning a public event at the Fairgrounds on January 13 for the official hand-over of the aircraft.

Details will be announced in the very near future, but Powell said there will be opportunities for the public to have photos taken with the plane. He added that museum members will enjoy special benefits at the event, including the chance to get much closer to the plane for photos.

The New Mexico Museum of Space History, a Smithsonian Affiliate, is a division of the NM Department of Cultural Affairs. For more information, call 575-437-2840 or toll free 1-877-333-6589 or visit the website at website or ‘Like’ their Facebook page.