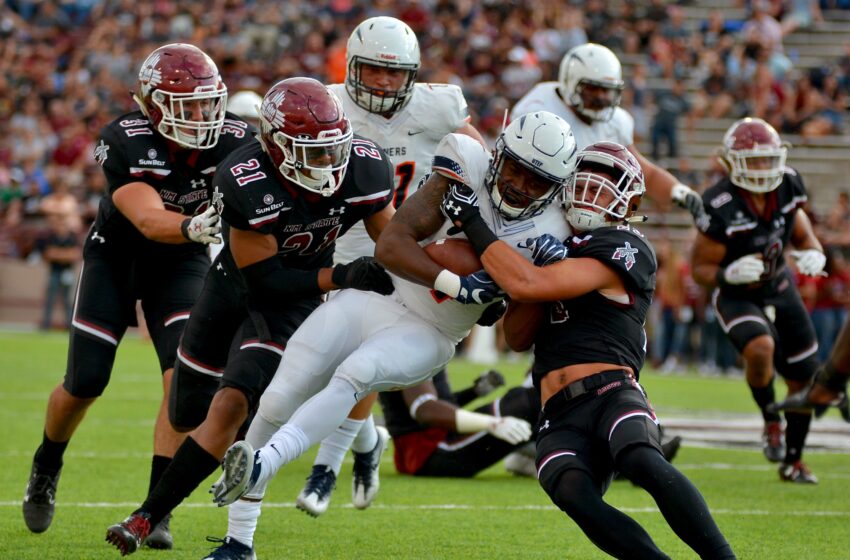 The Aggies (2-2) snapped the Miners’ school-record eight-game winning streak in the FirstLight Federal Credit Union Battle of I-10. UTEP (0-4) is 4-1 versus the Aggies under head coach Sean Kugler.

“Tough losing a game, but a rivalry game is even tougher,” Kugler said. “My hat goes off to them. I have much respect for coach [Doug] Martin and I am happy for him.”

Rose compiled 189 all-purpose yards with two rushing touchdowns and one receiving. Tyler Rogers completed 26-of-43 passes for 283 yards with a pair of scores for the Aggies.

The Miners tried two different quarterbacks (Ryan Metz in the first half, Mark Torrez in the second half), but their offensive woes continued. They finished with 227 yards of offense, including 81 on their only scoring drive in the first quarter. Their other touchdown came on a 26-yard fumble recovery by Trace Mascorro late in the game.

Metz, returning to the lineup after missing a game with a shoulder injury, threw three interceptions in the first half and finished 6-of-18 passing for 54 yards. Torrez was 4-of-16 passing for 38 yards with two picks and also rushed seven times for 31 yards.

“Just trying to get a spark,” Kugler said of the quarterback change. “We had three interceptions that stalled drives. Nothing against Ryan at all, just trying to provide a spark for the team and we didn’t get that accomplished.”

After the teams traded interceptions on their second offensive series, the Aggies drew first blood when Rose broke free for a 40-yard touchdown run.

The Miners tied it up with an impressive 12-play, 81-yard drive as Quardraiz Wadley, making his 2017 season debut, rushed four times for 30 yards in the sequence. Metz targeted his tight ends on the drive as Josh Weeks and David Lucero reeled in passes of six and 11 yards respectively. UTEP ate 6:52 off the clock on the series as Metz finished it off with a five-yard touchdown run.

The Aggies gave the Miners a taste of their own medicine in the second quarter as they took the ball at their own three-yard line and moved 97 yards on 15 plays over five minutes and 23 seconds. Rose scored on a 28-yard scamper, going over 100 yards for the game in the process and putting the Aggies ahead 14-7.

The Aggies increased their lead to 21-7 late in the second quarter when, on third and four deep in Miner territory, Metz’s pass intended for Keynan Foster was picked off by the Aggies’ Shamad Lomax and returned 19 yards for a touchdown.

The Miners got within field goal range right before halftime, but Lomax picked off Metz to end the scoring threat.

The Aggies put together a seven-play, 60-yard drive in the third quarter as Rose found the end zone for the third time. His two-yard TD reception from Tyler Rogers made it 27-7 in favor of NM State.

Rogers accounted for three touchdowns on the night. He connected with Conner Cramer for a 10-yard score late in the third quarter and ran for a four-yard TD early in the fourth.

Wadley had a promising start to his sophomore season, gaining 77 yards on 19 carries.

“He did a lot of good things tonight,” Kugler said. “Really, if he got into the flow of a normal game where we weren’t behind in the second half and had to throw it, he would’ve easily had a 100-yard game. He’ll be a weapon for us in the run game moving forward. We ran the ball better than we have.”

NM State put up 462 yards of offense and applied pressure defensively, collecting seven tackles for losses, three sacks and four quarterback hurries. The Aggies’ offensive efficiency was buoyed by a 9-for-17 effort on third down, compared to UTEP’s 2-for-15.

“Third downs and interceptions,” Kugler said. “They out-competed us and outplayed us.”

The Miners will make their first visit to West Point next week when they take on the Army Black Knights. Kickoff is set for 3:30 Eastern time on Saturday (Sept. 30) at Michie Stadium.

The game will be nationally televised on CBS Sports Network.

More coverage: Monster’s Musings – Battle of I-10 Not Much of a Battle