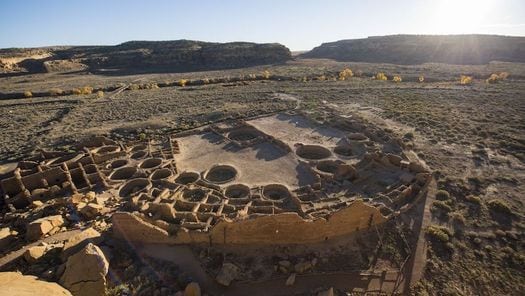 Representatives went to Washington to support passage of a bill to prevent any future leasing or development of minerals owned by the U.S. government within a 10-mile buffer region surrounding the park.

Paul Torres, who chairs the All Pueblo Council of Governors, said more than 90 percent of public lands in the Greater Chaco area already are leased. He said he believes allowing drilling to get closer could cause damage.

“Because now, with the technology of the drilling and all the other things that are done to extract the oil from the ground, the capabilities are there,” he said. “Even if there’s a buffer zone, they can drill horizontally.”

Senate Bill 2907 was introduced by Sens. Martin Heinrich and Tom Udall, both D-N.M. Greater Chaco is recognized as one of the United States’ 22 UNESCO World Heritage Sites.

Under Interior Secretary Ryan Zinke, the Bureau of Land Management has made conflicting statements about whether it will allow oil and gas drilling closer to the Chaco park.

While parts of the historic Chaco landscape are protected, Pueblo Acoma Governor Kurt Riley said the thousands of artifacts, ancient homes and roads could be damaged by new drill pads, pipelines and a web of industrial access roads. He said a first-hand viewing by Trump administration officials and Congress would be welcome.

“The invitation is always there for these individuals who have never been out West to come out West and to see the expanse firsthand,” he said, “and it gives you a totally different perspective of how much oil and gas development is already being done currently.”

The tribes say they want Congress to understand that Greater Chaco is meaningful to indigenous people in the same way Jerusalem is important to Jewish people, Muslims and Christians.

***
Support for this reporting was provided by The Pew Charitable Trusts.