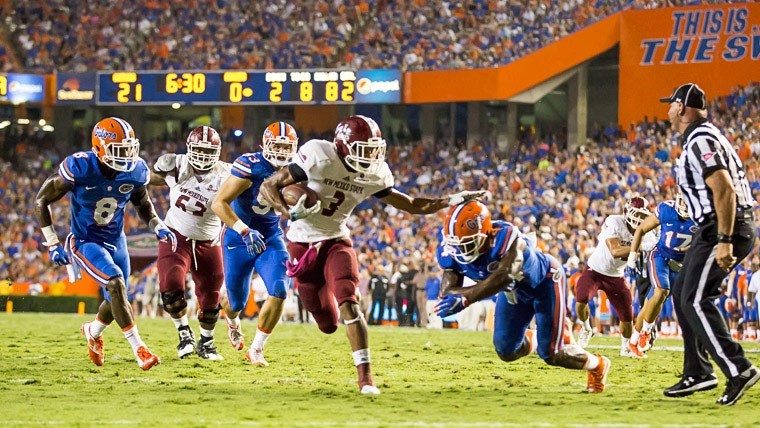 Tyler Rogers completed 14-of-27 passes for 128 yards to lead the Aggies (0-1). Teldrick Morgan and Greg Hogan each had three receptions on the night for 38 and 17 yards, respectively. Morgan also added a rush of eight yards.

Treon Harris led the Gators (1-0) as he completed 14 of his 19 pass attempts for 215 yards. Alex Anzalone had a team-high five tackles for Florida.

The Gators scored first as Harris connected with Brandon Powell for a 37-yard touchdown pass with 8:21 left in the first quarter.

The home team added two more touchdowns as Kelvin Taylor rushed nine yards into the end zone before Will Greer completed a 12-yard pass to C’yontai Lewis to give Florida a 21-0 lead with 10:59 remaining in the half.

Rose III then rushed down the right side for a 30-yard gain. Four plays later, the Aggies came up short on an attempted fourth down conversion as the Gators took over on their own 19-yard line with 8:26 remaining in the half.

On the first play of the following drive, Jacob Banegas recovered a fumble forced by Hanks. Rose III capitalized on the turnover as he scrambled 8-yards into the end zone to complete the six play, 18-yard drive as NM State cut Florida’s lead to 21-7.

Florida extended the lead with 3:17 before the break as Grier scored on a 4-yard quarterback keeper, but the Aggies responded quickly. Rogers hit Rose III with a 40-yard screen pass to move the ball into Gator territory before the Aggie quarterback found Morgan in the end zone with a 31-yard pass to leave Florida with a 28-13 lead.

Grier then hit Lewis with a 32-yard pass in the end zone to give Florida a 34-13 lead heading into the locker room.

The Gators then added four touchdowns and a pair of field goals in the second half as they collected the victory.

The Aggies return home next Saturday as they host Georgia State for the conference opener at 6 p.m. (MT) in Aggie Memorial Stadium. The Stuff the Stadium event will air on AggieVision and will be broadcast on AM 570.