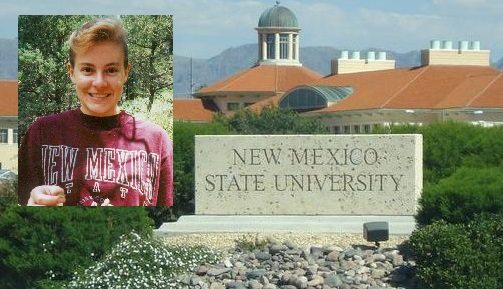 While she was a student at New Mexico State University, Brandy Streit worked on satellite tracking at the Physical Science Laboratory. When she wasn’t sitting in front of a computer, she could be found at an Aggie basketball game, sometimes joined by her parents, Ed and Sandy Streit, who would come from Roswell to travel with her to away games.

Brandy earned her degree in computer science at NMSU in December 1993. An active woman, a Girl Scout and a dancer, she was the vibrant and joyful heart of her family, so it came as a shock when at 34, with no warning, Brandy passed away of a pulmonary thrombo-embolism.

Following the devastating tragedy of their daughter’s early death, Ed and Sandy Streit decided to take her legacy and build it into a force for influencing the futures of other students at New Mexico State University.

Sandy recalled Brandy’s experiences working her way through NMSU co-op programs, with jobs at the Physical Science Laboratory and in the computer science department as tech support, and two internships at IBM in Dallas.

Brandy first started on a path toward electrical engineering, but told her mother of her eventual epiphany: That she was really more of a software person than a hardware person.

After college, Brandy followed her passion in computing, and shortly before her death, she had celebrated 10 years of employment at Applied Research Associates in Albuquerque, New Mexico.

In their grief, her family wanted her memory to live on, and discovered a way to build on the passions she had in life for others. The Brandy K. Streit Memorial Endowed Scholarship will make one or more awards to an undergraduate or graduate level student in computer science, but also one award to a student athlete to honor her love for Aggie basketball.

Just one month before Brandy’s passing, she and her parents had traveled to New Orleans together to watch the Aggies play.

“She was so very loving and caring,” Sandy said. “She was the heart of our family and that is why remembering her with this scholarship is special to us.”

The Streits used two separate opportunities to increase the impact of their endowed scholarship. First, they drew on the excitement of NMSU’s Giving Tuesday in late November to spur on their friends and family to take part in a unified day of giving in Brandy’s memory, just as they did on Brandy’s birthday, May 4.

Secondly, they sought out an annual matching gift from Ed’s former employer, State Farm, for their birthday contributions each May – and later, each Giving Tuesday – to the scholarship.

Even though Ed is retired, those match opportunities bolstered the gift that the Streits could make to build the scholarship.

Now, the legacy of Brandy’s love of computer science and her love of basketball makes a difference in the lives of up to three students each semester.

Receiving Brandy’s scholarship gives Kurtlynd McIane a feeling of reverence. At 22, McIane is a transfer student, but found a home when he came to Las Cruces. Involved in the NMSU Army ROTC and the New Mexico National Guard, it’s at NMSU where McIane found he could combine his passion for computer science with a career.

McIane now wants to merge his love of the military and love of computers. In 2019, he’ll start a commission in the U.S. Army and work to become cyberwarfare officer.

Scholarships have helped pave a path for McIane, something he understands from his military background, McIane recently took a trip to the resting place of another person whose memorial scholarship he was receiving. He said he plans to pay his respects and honor Brandy Streit’s memory in the same way.

“It’s thinking of those coming up in the ranks behind you and giving back to them. I’m being helped by those who came before me,” McIane said. “It’s why I went to that gravesite, because I wanted to show the respect and show my gratitude. A gift in someone’s memory, it’s an incredible honor.”

For more information about creating a last legacy to honor a loved one, or to explore how your employer could match a gift, call the NMSU Foundation at 575-646-1613 or visit https://ignite.nmsu.edu