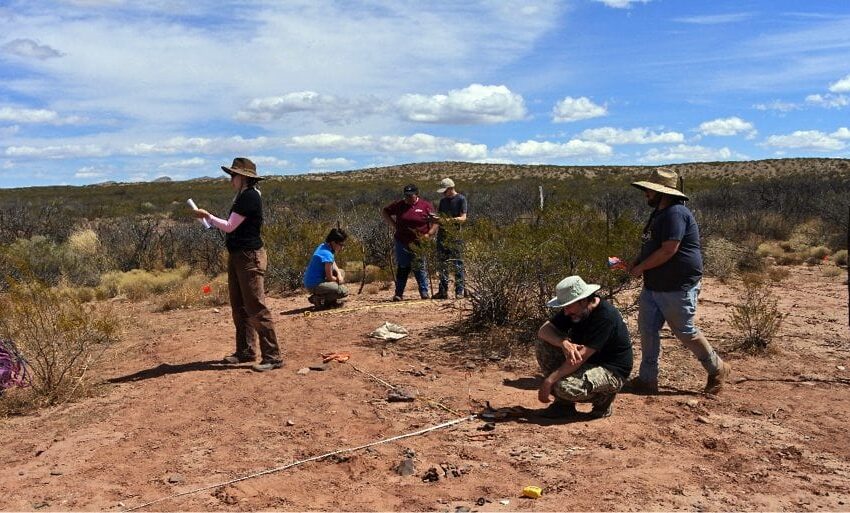 Kelly Jenks, her research assistant Shannon Cowell, and students enrolled in her Cultural Resource Management classes are doing the work as part of a cooperative grant with the New Mexico Bureau of Land Management.

Last spring, Jenks and her students worked at the site of Paraje San Diego, a popular campsite along the Camino located south of Hatch. Students mapped the locations of all artifacts and features and brought the artifacts back to NMSU for further study.

Cowell was a student in that class and studied the pottery fragments recovered from the site. She found that they came from four distinct areas, each of which was probably a campsite. By looking at the different types of pottery in each cluster, she was able to figure out when each campsite was used and where the travelers were coming from.

“We can learn a lot by looking at where artifacts are found,” Jenks said. “That’s why it’s so important for people not to pick them up.”

This spring, the class traveled north to record La Parida, a 19th-century Hispanic village site located along the Camino just north of Socorro. The village was described by soldiers who marched through it during the Mexican-American War, but most of the residents left after severe floods in the 1850s and the houses eventually melted away.

“All of the structures were adobe and when we went there, you couldn’t even see the outlines of the walls anymore,” Cowell said.

The students relocated the old homesteads by finding scatters of artifacts and faint traces of adobe walls.

“We also used historic documents and photographs to help us figure out where things should be,” said Jenks. “We’re putting together a map of the village now, and trying to learn more about each household by looking at the kinds of artifacts we recorded nearby. At the end of the project, we’ll turn in a report to the BLM so that they can share the information with the public.”

Jenks’ team consists of herself, a research assistant, and students in her CRM classes (nine this semester) who receive academic credit for their work in the field. The students, mostly graduate students in anthropology and history, get ‘real world experience’ working on public land.

“It helps our students get the experience they need to get jobs,” said Jenks. “And the federal agencies really value the expertise we have to offer. It’s a win-win!”