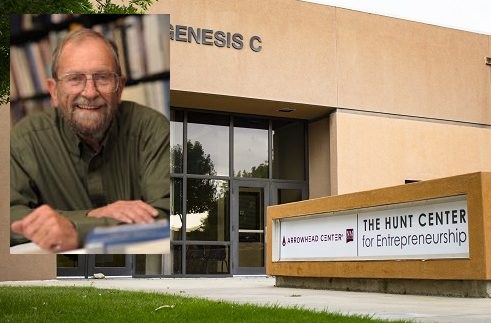 Economist Jim Peach, who retired after a 38-year tenure as a New Mexico State University Regents Professor in 2018, guided the preparation of this year’s economic base studies published by Arrowhead Center. | NMSU photo by Darren Phillips

At New Mexico State University’s Economic Outlook Conference in February, economist Jim Peach forecast this year as an average year, with a typical economic growth of roughly two percent. But due to the COVID-19 pandemic, 2020 became anything but average.

Those who had hoped to gain insights on future of growth may be looking for insights on recovery instead in this year’s Arrowhead Center economic base studies. Released annually online for free, the purposes of economic base studies include understanding regional economic growth, short- and long-term forecasts, identification of potential growth sectors, and identification of potential problem areas.

The studies also give an indication of an area’s strength compared to the state and the nation.

“It gives a quantitative measure of what a county specializes in, which is useful information for trying to plan what you might want to do going forward in matters of economic recovery,” Peach said. “It tells you what an area has specialized in and where it might have as, economists refer to as, a comparative advantage.”

The reports were prepared under the direction of Peach, who retired after a 38-year tenure as an NMSU Regents Professor in 2018 and who throughout his career has been published in numerous journals. He also continues to make media appearances and presentations to many groups. Erin Sumner, a graduate student at NMSU in the Doctorate of Economic Development program who is employed by Arrowhead Center, did most of the work on this year’s economic base studies.

“We’re a long way from being able to capture the effects of the virus on the economy,” Peach said. “The data lags behind about a year and half, but it’s still a good measure to find out how to stimulate a local economy by propping up what had been working.”

The series of 35 economic base studies was prepared by the Office of Policy Analysis at NMSU’s Arrowhead Center. Of the 35 reports, 33 describe the economic base of New Mexico’s counties. There are separate reports for the Albuquerque Metropolitan Statistical Area and the State of New Mexico.

“The base studies can be a big help for economic developers, policy makers and community members looking to understand the economy in their local community,” said Kramer Winingham, program director at Arrowhead Center who oversees many of the center’s economic studies. “Base industries are key to developing and growing local economies. Identifying and cultivating local base industries is an effective approach to economic development.”

In separate reports, there are also supplemental answers to frequently asked questions such as how long recessions last, what is a business plan and what is an economic multiplier – all explained in simple terms.