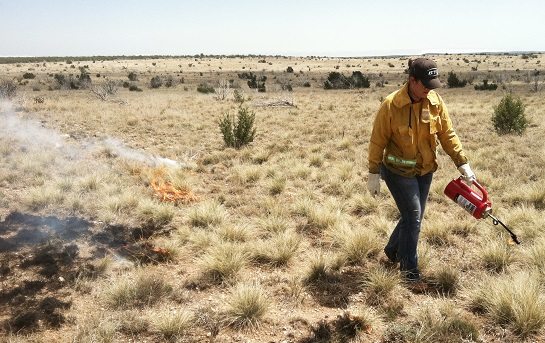 Well before the emergence of humans on the planet, fire played a role in shaping vegetation. Evidence suggests fire may have been burning plants as early as 440 million years ago.

The question of how long humans have been using fire, for cooking, is hotly debated.

“So where do these two stories converge? How long have humans been using fire to manipulate vegetation?” said Doug Cram, wildland fire specialist in New Mexico State University’s College of Agricultural, Consumer and Environmental Sciences.

“At least in North America, Native Americans were the first fire managers. However, that skill has largely been lost among landowners.”

Unlike other management tools such as tree cutting or herbicide spraying, burning is not a surrogate for some other disturbance. Rather, it is a natural process that can be used to influence vegetation toward a specific objective, such as reduced brush cover.

Last month the NMSU Cooperative Extension Service and the New Mexico Prescribed Fire Council joined forces to begin training the next generation of landowners on the safe and effective use of fire.

The training was conducted on the NMSU Corona Range and Livestock Research Center under the direction of Shad Cox, superintendent; and Richard Dunlap, senior research assistant.

“Fire is a useful management tool, but understanding when, where and how to use it takes practice,” Cox said. “The training was designed specifically to address how to best use fire.”

To facilitate this learning, the New Mexico Prescribed Fire Council recently acquired a “Burn Trailer” that citizens can borrow. The trailer contains all the tools landowners would need to burn.

“Equipment that they would not find in the barn can be found in the trailer, such as drip torches, flappers, Pulaskis and a sling psychrometer, an instrument used to measure relative humidity,” Cram said.

“Burning in the Corona country is one part fire experience and nine parts weatherman,” said Brent Racher, a veteran burner who helped teach the students.

Indeed, being able to interpret weather forecasts for the day of the burn, as well the following days, is critical to successful burning.

“People need to know what will be the wind speed and direction, relative humidity, ventilation rate and fuel moisture,” Cram said. “These are all variables that must be considered and taken into consideration.”

In addition, smoke must be account for in order to avoid impacting downwind neighbors, communities and highways.

“This unique training opportunity is set to be repeated annually, as well as later this summer during growing season conditions, a historically non-traditional season of burning that may offer equal efficacy but with reduced fire behavior conditions such as flame lengths and rates of spread,” Cram said.

Contact Cram at 575-646-8130, dcram@nmsu.edu, or the NM Prescribed Fire Council to learn more about this hands-on training.