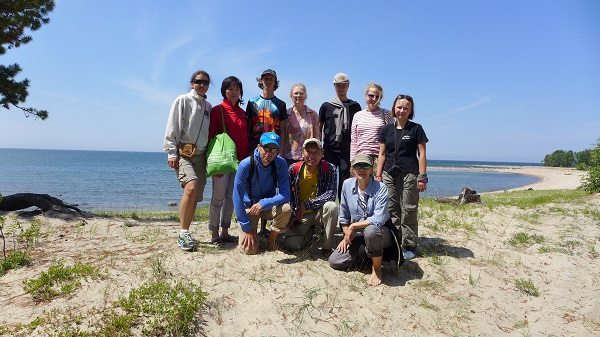 Water availability affects everyone. Whether you’re in New Mexico or Siberia, everyone shares concerns about water resources.

Due to their expertise in irrigation water conservation and aquatic organisms, the following New Mexico State University faculty members were invited to speak at a conference in Ulan-Ude, Siberia, Russia:

All part of NMSU’s College of Agricultural, Consumer and Environmental Sciences, the three faculty members presented at the international conference in June, which focused on aquatic biodiversity and the protection and sustainable use of aquatic resources.

“We were invited because of our work in both irrigation water conservation and the study of aquatic organisms adapted to arid environments,” Sevostianova said. “I am still in contact with some of my former colleagues from St. Petersburg University in Russia, and we follow each other’s careers. That is why we received such an unexpected invitation.”

The meeting was held at Lake Baikal and covered various aspects of protecting the biodiversity of aquatic ecosystems. Lake Baikal is the largest body of freshwater on earth. The lake holds 20 percent of the world’s freshwater.

Although the water in Lake Baikal and in New Mexico is not the same, both face similar issues.

“Despite our climatic differences and the massive size of Lake Baikal compared to our water resources here in New Mexico, we share the same concerns regarding our precious aquatic resources,” Sallenave said. “Freshwater resources here and in Siberia are under growing pressure from pollution due to urbanization and industrialization. There is a pressing need on both sides of the world to protect and conserve our aquatic flora and fauna.”

Conference attendees not only listened to scientific presentations, but they also saw problems firsthand during a two-day excursion along the shores of Lake Baikal.

The conference catered to young and early-career scientists. However, the event organizer also invited a group of tenured and more seasoned researchers to share their experience and knowledge with the young scientists. Hence, Leinauer was invited to give a special lecture entitled “Communicating your science: from your research project to presentation and publication.”

He shared his experiences in publishing, and he outlined all the steps necessary to present clearly and to successfully publish research findings. Conference participants voted Leinauer’s presentation “best plenary lecture.”

Sallenave gave an overview of diversity of drought-adapted biota in New Mexican playas in a poster presentation entitled “Tadpole shrimp: diversity and distribution in the arid Southwestern United States.”

She explained how tadpole shrimp – primitive crustaceans known as living fossils – have survived for millions of years due to their adaptations to ephemeral waters. She also explained that worldwide changes in land use practices have led to global losses and deterioration of these pools. Her poster was voted “best scientific poster.”

Leinauer foresees NMSU researchers continuing to partner with scientists around the globe.

“After meeting and talking to several very bright and enthusiastic young scientists, it became clear that the work we do at NMSU is also very relevant to other areas in the world,” Leinauer said. “There is certainly a possibility for collaboration in the future.”