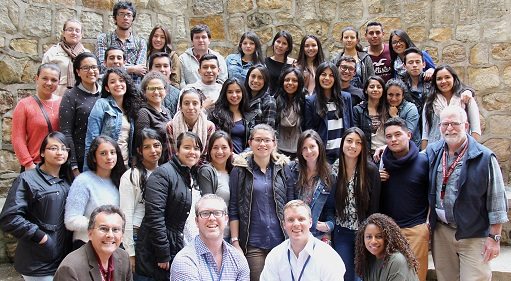 Two New Mexico State University faculty members in the College of Agricultural, Consumer and Environmental Sciences have recently returned from Colombia, where they shared their knowledge of climate change and the ramifications of climate change on food security.

Mick O’Neill, a professor in the Plant and Environmental Sciences department, and David DuBois, New Mexico State Climatologist and an NMSU associate professor also in the Department of Plant and Environmental Sciences, joined a group of international faculty at the University of La Salle in Bogotá, Colombia, to teach at the university’s Summer Academy.

DuBois and O’Neill also organized a two-day “hackathon” led by the staff from Global Development Analytics. The hackathon incorporated presentations on meteorological data acquisition and analysis using a global database made freely available by aWhere, Inc.

“The La Salle Dean of Agriculture and the director of the International and Interinstitutional Relations Office were extremely pleased with the team-teaching approach initiated by NMSU faculty from Plant and Environmental Sciences,” O’Neill said.

DuBois said he and his students also experimented with social media during the climate change portion of the summer course.

“The students researched data and papers of their interest on climate change, and then followed climate scientists from around the globe on Twitter to get a glimpse of the hot topics and discussions,” DuBois said. “Twitter gave our students an opportunity to listen and communicate with other scientists that they would normally not have access to.”

Some of the topics discussed during the course and hackathon can be viewed by searching for the hashtags #lasalleclima16 and #hack4farmingbogota on Twitter.

NMSU faculty members and students have been participating in an exchange program with the University of La Salle’s Utopiá Project since 2014. The program began when the international programs office at La Salle asked the NMSU Office of International and Border Programs to join them in developing a project proposal to submit to Partners of the Americas, a private sector organization which carries out multi-year projects in the Western Hemisphere. The La Salle-NMSU consortium was awarded the project in June 2014.

The focus of the Utopiá Project is creating and integrating agricultural, educational and productive opportunities for resource-limited young people from rural areas of Colombia who have been traumatized by drug-related violence. The project’s goal is to reinvent Colombia’s agricultural sector to achieve a sustainable agricultural transformation through participatory research and appropriate technology utilization.

Partners of the Americas has also sponsored the 100,000 Strong in the Americas initiative in association with the White House.

In August, the Utopiá project was awarded the National Prize for Solidarity by the Alejandro Angel Escobar Foundation in Colombia. The prize is regarded as the highest scientific award in Colombia and recognizes those who have made significant scientific discoveries or achievements, and those involved in charities that have made a significant impact on Colombian communities.

For more information on the hackathon, visit http://globaldevelopmentanalytics.org/gda-facilitates-2016-la-salle-hackathon-in-bogota-colombia/