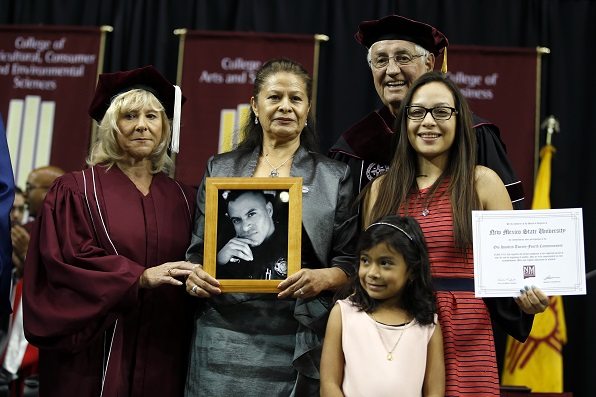 “Officer Chavez was a dedicated student and gave his life serving this community,” NMSU Chancellor Garrey Carruthers said during the commencement attended by more than 1,000 graduates. “He absolutely earned this degree and we were proud to present it to his family. He’s a perfect example of how NMSU is a caring community.”

Carruthers presented a certificate to Chavez’s mother, Maria Chavez, and his daughters Janiley, 14, and Aryan, 6, as Maria carried a photo of Chavez across the commencement stage.

Maria Chavez said she was already proud of her son, but now even more so after receiving the posthumous degree.

“His death has changed my life,” Maria Chavez said. “It destroyed my life, but receiving this helps with the pain which I will feel for the rest of my life.”

“We are very thankful to NMSU for presenting this degree to us in his honor,” Janiley Chavez said. “We are very proud of him.”

Chavez was somebody his colleagues say embodied an American success story. The 33-year-old officer was a first-generation college student who had always dreamed of serving his community as a police officer.

At the time of his death he was studying criminal justice and had nearly completed his degree. Chavez had just registered for his last semester of classes a few days before he was killed.

“He already had a career, but it was clear that education was important to him,” Posadas said of Chavez. He described Chavez as very friendly, professional, respectful and humble. “When we talked, he expressed his eagerness to finish his degree.”

Upon hearing about Chavez’s death, Posadas notified department head Jeff Amato and College of Arts and Sciences Interim Dean Enrico Pontelli that Chavez had been an NMSU student and deserved being awarded the bachelor’s degree in criminal justice posthumously. They concurred and the process for awarding the degree began.

The recognition of Chavez at commencement followed other events in which the NMSU community reached out to show respect and gratitude for the fallen officer.

During the fall, the NMSU football program held the Aggie Badge Bowl to raise money for Chavez’s family. The event, featuring current NMSU players and members of the law enforcement community playing a flag-football game, raised more than $4,300.

“I’m glad we could be a part of such a special occasion,” Dominic Johnson said at the time. Johnson, the Aggies’ freshman quarterback, added, “If it wasn’t for law enforcement officers like Officer Chavez, our safety would be in jeopardy. They make a lot of sacrifices and help our community tremendously.”

Born in Juarez, Mexico, Chavez became a U.S. citizen in 2011, which was a stepping stone to his real passion: law enforcement.

He interviewed with the Hatch police department to be an officer in 2014. His fellow officers said he exceeded all expectations, and his infectious smile made him stand out from the five other officers.

During his funeral, attended by thousands of people, Gov. Susana Martinez said, “Jose worked hard to earn his American citizenship. But for him that wasn’t enough. He insisted on giving back, on serving the community and country that he loved.”

Love was Chavez’s final thought. Diocese of Las Cruces Bishop Oscar Cantu said during the funeral that his last words were, “Tell my mother that I love her; tell my girls that I love them.”