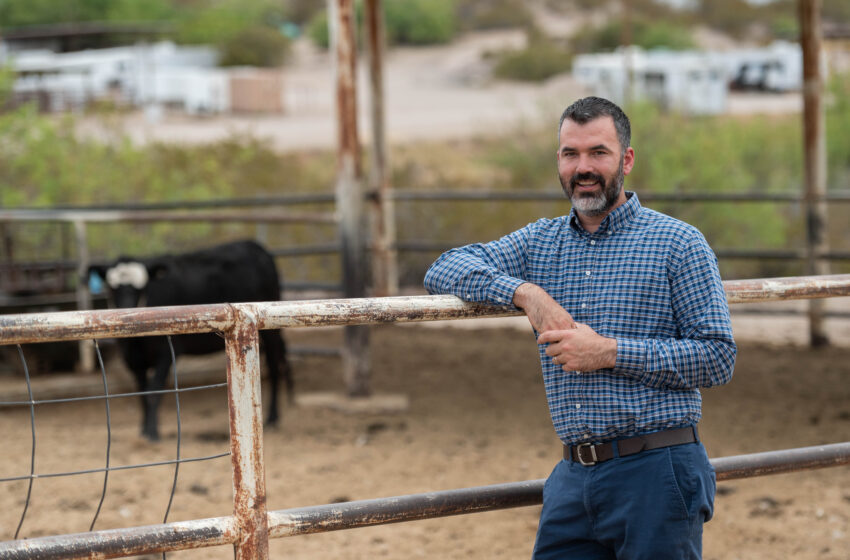 Brandon Smythe is the director of New Mexico State University’s Veterinary Entomology Research Laboratory, which is home to a unique large animal research facility located on 45 acres at the base of “A” Mountain. | NMSU photo by Josh Bachman

Instead of looking at flies as one of the worst ways to ruin a picnic, Brandon Smythe thinks about how flies can affect animals, especially the impact on rangeland cattle.

Smythe is the director of New Mexico State University’s Veterinary Entomology Research Laboratory, which is home to a unique large animal research facility located on 45 acres at the base of “A” Mountain. It’s a 5,000-square-foot animal laboratory that is capable of housing 20 animals in environmentally controlled rooms, and maintains multiple insect-rearing facilities for major ectoparasites of humans and animals. Research at the lab is focused controlling house flies, stable flies, horn flies, face flies, mosquitoes, lice, mites and ticks.

The lab is an extension of the Agricultural Experiment Station’s 12 science centers located across New Mexico and is housed in the College of Agricultural, Consumer and Environmental Sciences at NMSU.

“Ninety-five percent of our research is fly research,” Smythe said. “It’s a nice mixture of entomology and large animal veterinary care. We test products before they go to market to ensure they’re controlling what they say they control and there’s no adverse reactions.”

Funding for the lab comes from multiple private industry partners, including animal pharmaceutical companies. Because of those private industry contracts, a lot of the work the lab conducts must remain under wraps, but some of the lab’s student-based research is available through journal publications.

One research article looked at how to take accurate population estimates of horn flies on cattle, specifically Angus and Hereford yearling heifers, through digital photography compared to traditional visual assessments.

Researchers at the lab are now looking at how the growth and reproductive performance of rangeland cattle are influenced by controlled and uncontrolled populations of horn flies.

“The horn fly is the number one fly pest of cattle,” Smythe said. “If insecticide control is provided, you can see an $11 return for every $1 spent on fly control in New Mexico rangeland-based cow-calf operations. These returns are largely based on average weight gain advantages.”

Smythe said the lab is one of two labs in the nation that has a colonized horn fly system, and the only one with a permethrin-resistant colony. Permethrin is the most commonly used insecticide.

While Smythe was appointed as the lab’s director earlier this year, he’s no stranger to the lab and its work. Smythe has served as the principal investigator of the lab for the last six years and holds bachelor’s and master’s degrees in agricultural biology, a second master’s degree in animal science, and a Ph.D. in animal science, all from NMSU. While still an undergraduate, Smythe began working at the lab as a research aide.