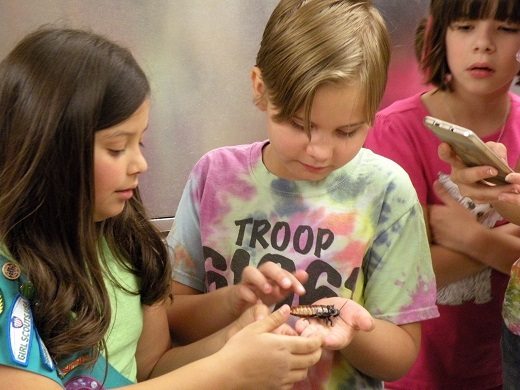 If you’re interested in racing Madagascar cockroaches – or at least watching the bugs race – you won’t want to miss the Fright Night film festival at New Mexico State University.

Giant worms, spiders and wild animals have been on the big screen the past three fall semesters. It’s all part of an annual Fright Night film festival hosted by the NMSU Department of Entomology, Plant Pathology and Weed Science in the College of Agricultural, Consumer and Environmental Sciences.

The fourth annual event is Oct. 21 in the Gerald Thomas Hall auditorium, Room 194. Two feature films will be shown starting at 6:30 p.m. Doors open at 6 p.m.

Movie night will begin with “Mimic.” Directed by Guillermo del Toro, this movie is about an entomologist who genetically creates an insect to kill cockroaches carrying a deadly disease. The insects set out to destroy mankind.

Starring Donald Sutherland and Jeff Goldblum, “Invasion of the Body Snatchers” will follow a 10-minute intermission. This movie tells the story of the human race being taken over by human clones created by pod plants.

Admission is free, and snacks will be provided. Moviegoers will also have a chance to win prizes.

EPPWS Department Head Jerry Sims, along with entomology professor and arthropod museum director Scott Bundy, decided to bring a film festival to NMSU in 2013 as a public outreach effort. The idea came from a film festival Sims had attended on numerous occasions while at the University of Illinois.

“We are very familiar with the successful program at the University of Illinois, and we hope to accomplish the same success here,” Sims said. “We want to use the concept to strengthen the relationship between the community and both the department and the College of ACES.”

Fright Night won’t be limited to just the movies on the big screen. Faculty members will provide the audience with information about the science behind the stories.

This year, Bundy and assistant professor of urban entomology Alvaro Romero will give short presentations with accurate scientific information about “Mimic” and “Invasion of the Body Snatchers.”

“They will provide the audience with a little bit of knowledge about insects, regarding what they can and can’t do,” Sims said. “They will also aim to debunk any fantasy or misinformation in the movies.”

During intermission, Romero will have a racetrack set up for a Madagascar cockroach race.

The first event in 2013 featured the movie “Tremors,” a film about giant underground worms. Prior to the film, distinguished professor of nematology Steve Thomas showed the audience a giant preserved parasitic nematode.

The following year, Bundy served as the host, showing the movies “Arachnophobia” and “Eight Legged Freaks.” Last year “Jumanji” – starring Robin Williams – was shown. “Jumanji” features a magical board game in which animals come to life.

Sims said there has been an increase in moviegoers in recent years, especially among high school students.

“We’ve had a number of high school students come in who’ve had assignments from their science teachers,” Sims said. “Sometimes the students are required to report back on things that they saw while at Gerald Thomas Hall, whether it’s scientific posters or other things related to the movie night.”

The Fright Night film festival isn’t the only EPPWS outreach event. The department is involved in many other activities involving insects or plants. EPPWS is home to an arthropod museum and an insect zoo. Some of the faculty members participate in bio blitzes, and some are part of the Cooperative Extension Service and travel all over New Mexico reaching out to the public.

“The arthropod museum is one of our biggest outreach tools,” Sims said. “We reach about 5,000 kids a year and about 6,000 people in total. And over the years we’ve found a number of students reporting that they chose ACES or they chose entomology – either here or at another university – because of a visit to the arthropod museum.”

Sims plans to continue the film festival each fall.