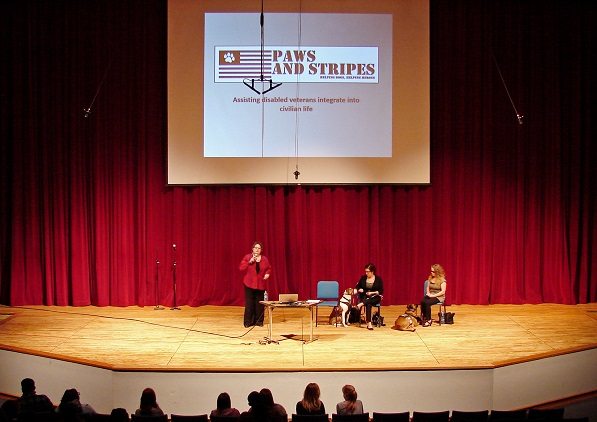 The New Mexico State University College of Agricultural, Consumer and Environmental Sciences is in the process of establishing a partnership with Paws and Stripes, a nonprofit organization in Albuquerque that provides service dogs to wounded military veterans.

Gaylene Fasenko, associate professor in the NMSU Department of Animal and Range Sciences, first learned about Paws and Stripes when she arrived at the university in 2010, the same year the nonprofit opened its doors.

Fasenko and the college invited Paws and Stripes to take part in her companion animal and human-animal interaction (HAI) class, as well as in a lecture for the public at Atkinson Recital Hall last month.

Both the class lecture and the public lecture were on Veterans Day and were part of NMSU Military and Veterans Appreciation Week. The featured speaker was military veteran Rachael Thompson, accompanied by her service dog, Myrna.

Fasenko said the presentation in her class had a powerful impact on the students.

“I can teach all day long about the symptoms of PTSD, and I can demonstrate what I heard from someone else about hugging a wall and being so hyper-vigilant that you can’t turn your back on an open space,” Fasenko said. “But until you hear firsthand from someone who’s going through this, you don’t realize the severity. It’s one of the most powerful lectures you will ever hear.

“It helps the students realize there’s a lot of people in this country that truly devote their lives to being part of the military, and then they get hurt as part of their service. It reveals a layer of empathy and a layer of appreciation that we should have.”

With NMSU’s new HAI minor, this is the ideal time to begin the partnership. The minor is intended to augment the academic path for students who plan to pursue a career in animal science, as well as human health and wellness fields, such as criminal justice, early childhood education, special education, occupational therapy, psychology, social work or family and consumer sciences.

Stephanie Barger, director of programs for Paws and Stripes, said a partnership with NMSU is important because of the potential for research opportunities pertaining to service dogs.

“In the academic world, there is very little research on service dogs, particularly those that help people with PTSD and TBI,” Barger said. “Researching the benefits can only be a positive thing. We are very enthusiastic, and we love working with academia and teaching people about service dogs, especially those who help veterans with PTSD and TBI.”

Fasenko envisions the partnership to include visits by veterans and their service dogs to her classes, lectures for the public, internships with the nonprofit and perhaps even Skype sessions. She said it would be an invaluable learning opportunity for her students and the NMSU community in general. Information about service dog and therapy dog training is already part of the companion animal curriculum at NMSU.

Barger said although the partnership is in the early stages, she knows it has the potential to be mutually beneficial.

“We are in early discussions, and it’s important to identify activities and projects that would benefit both NMSU and Paws and Stripes,” Barger said. “I’m hopeful we can provide educational presentations and subject-appropriate lessons for the classroom.”

Another connection has developed between the university and the nonprofit. NMSU alumna Dianna Franco took various companion animal classes with Fasenko. After receiving her bachelor’s degree in individualized studies in 2014, she was offered an internship opportunity with the nonprofit. She’s now part of the Paws and Stripes dog training team.

Franco said studying various subjects at NMSU helped prepare her for her career.

“Studying multiple areas while at NMSU helped prepare me for this career, because they exposed me to disabilities, human anatomy and physiology, the science behind training animals and how animals can be helpful to people with disabilities,” Franco said. “I also spent two years volunteering with the NMSU Therapeutic Riding Association, which gave firsthand experience on how powerful the human-animal bond is. Working for Paws and Stripes has required extensive on-the-job training, but having the varied background that I have from NMSU has helped in many ways.”

Both Fasenko and Paws and Stripes personnel want the public to see the science behind service dogs – it’s not just about dogs doing tricks. A dog may be trained to perform tasks such as serving as a buffer, alerting its owner of an approaching person or awakening the owner from severe nightmares.

For more information about NMSU’s companion animal program, please contact Fasenko at 575-646-3402 or gfasenko@nmsu.edu. Anyone interested in donating to the companion animal program should make checks payable to NMSU Foundation and indicate the Companion Animal Fund in the memo line. Checks may be mailed to P.O. Box 3590, Las Cruces, NM 88003. For more information, contact the NMSU Foundation office at 575-646-1613.

To learn more about the program click Paws and Stripes.