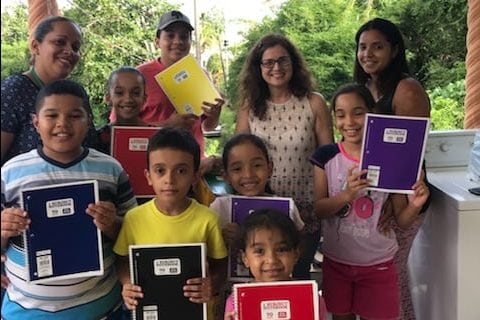 Nearly a year to the day Hurricane Maria made landfall in Puerto Rico, devastating the U.S. commonwealth and its people, a New Mexico State University assistant professor shared some of the preliminary findings of her study on the mental health of aid workers who are still working to help residents.

Torres Fernandez began fundraising efforts to help Puerto Ricans in need of food, water, batteries and other goods. She also began a yearlong study in March focusing on the mental health of those who not only provided aid to storm victims, but who were also victims of Hurricane Maria.

“I started to collect data and it was hard to do, because there was not going to be a perfect time to do it. The emotions are still raw,” Torres Fernandez said. “The emotional wounds this horrible storm left are intense.”

Hurricane Maria was a Category 4 storm when it hit Puerto Rico on Sept. 20, 2017. It is regarded as the worst Atlantic hurricane since 2004, and on August 28 Puerto Rico Gov. Ricardo Rossello raised the U.S. territory’s official death toll from 64 to 2,975 after an independent study, according to the Associated Press.

Torres Fernandez made her third trip to Puerto Rico since Hurricane Maria in July, and said although she is seeing progress, it has been ‘painfully slow.’ So far, Torres Fernandez has completed her first round of interviews, talking to 15 people including first responders, healthcare workers, community leaders and private citizens who have assisted in relief efforts. Out of the 15, 10 have been women. The first group ranged in age from 18 to 71.

Torres Fernandez is planning to conduct a second round of interviews, mainly with mental health professionals.

“I’m asking them what it was like to have been impacted by the storm and having to provide emotional support and psychological help to others. How did they cope,” Torres Fernandez said.

One surprising thing she learned was that in helping others, aid workers healed themselves. By providing support and assistance to those who are still experiencing depression, anxiety, suicidal ideation and post-traumautic stress disorder, it has helped them cope and find some relief.

“On a personal level, that’s how I’ve been healing,” said Torres Fernandez. She was not in Puerto Rico during Hurricane Maria but her family, who still live on the island, experienced the storm and its after-effects. Torres Fernandez said residents are still suffering from anxiety whenever it rains, and anxiety has been heightened during this year’s hurricane season.

Torres Fernandez said that by talking to mental health professionals next, she hopes to take a closer look at whether they are experiencing compassion fatigue and whether they have adopted any self care strategies to help them cope. She also wants to explore other consequences of the hurricane such as health issues that occurred after residents were forced to rely on canned food for survival, and the limited access to quality health care.

In talking to her first group of interviewees, Torres Fernandez found that although aid workers were emotionally impacted by the experience, adopting a positive outlook has helped them through tough, emotional times.

One woman told me, “We are broken, but we are not defeated. We will rise again,” Torres Fernandez said, her eyes welling with tears. “This speaks to the resilience of the people of Puerto Rico. Keeping a positive outlook on life makes a difference.”

Participants also raised concerns about the federal aid response versus the local response. Although participants positively rated the response at the municipal level, the majority of participants believe both the federal and local government didn’t do a good job, Torres Fernandez said.

To date, those donations have helped students in three schools and the residents of an assisted living facility, along with several residents in rural areas.