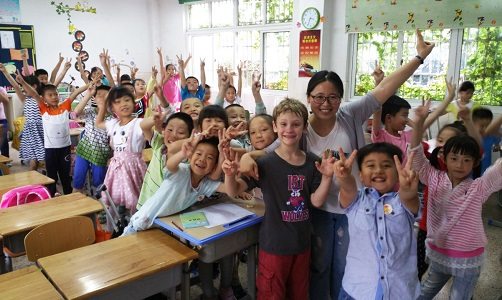 It’s a centuries-old game that originated in China but is played around the world. Last summer, a New Mexico State University sociology professor watched as the game known as “rock, paper, scissors” helped her 7-year-old son to navigate culture and language barriers when he visited a school in China.

NMSU associate professor Sandra Way will share observations of her son’s interaction with other students at a school in Nanjing, China in the next talk for the College of Arts and Sciences “Global Connections” lecture series.

Way will present “The Universal Language of Rock, Paper, Scissors: Reflections on a Chinese Elementary School Exchange” from 5-6:30 p.m. on Wednesday, Feb. 8 in the College of Health and Social Services Annex Auditorium, room 101A.

“The trip was through my son’s school, where they have a dual language program,” Way said. “We’ve always wanted him to experience different cultures, so we couldn’t pass up the opportunity. I then was able to see how a young American boy adjusted to being in a class of Chinese students his age.”

The title for her talk came from watching her son struggle in the classroom and later see him find his way with classmates out on the playground through a game of “rock, paper, scissors.”

Way’s research is focused on the effects of school organization and climate on student outcomes. She specializes in the sociology of education and stratification, particularly race or ethnicity and gender.

“As a sociologist, it was interesting to see the interactions between the American students and the local students,” said Way. “My son integrated extremely well, and was even able to spend the night at two of his classmates’ homes.”

In addition to sharing observations of her son’s interactions at school, she also will speak about her own experiences and the differences between the two cultures.

While her son was in class, she spent her time discovering different parts of Nanjing. The program also planned trips where they visited various sites around Nanjing and larger cities such as Xian, Beijing and Shanghai.

“One of the surprises of the trip was how similar to the United States the experience felt,” Way said. “While there were certainly signs of state control, such as our inability to access anything Google, the everyday of lives of the Chinese people we met were not that different from our own.”

While Way was able to see and do different things around the country, she enjoyed most getting to see her son absorb the culture.

“China was an experience very different from any other trip I’ve been on,” said Way. “I’m looking forward to my family having another experience like this soon.”

The “Global Connections” series features faculty members’ exotic trips around the world. The purpose is to provide an opportunity for members of the campus and surrounding community to listen and ask questions of NMSU professors about the kind of global first-hand experiences they might never otherwise encounter.

The “Global Connections” series will offer talks by faculty members each month through April. The lectures are free and open to the public.