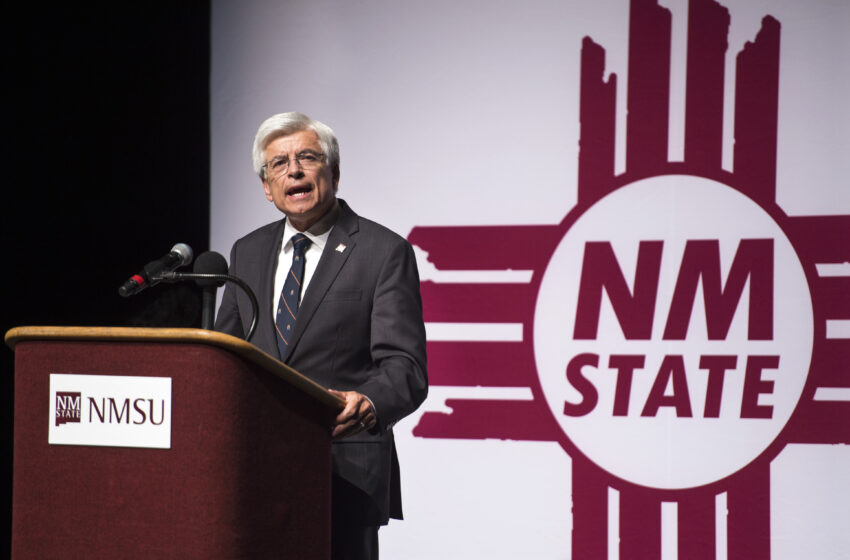 New Mexico State University’s Board of Regents announced the selection of Dan Arvizu, Ph.D., as the university system’s next chancellor and John D. Floros, Ph.D., as president of NMSU.

The Regents described this as an opportunity to take the university to the next level, and by dividing the responsibilities among two leadership positions, to create a unique atmosphere for success.

Arvizu presently serves as senior adviser to the Emerson Elemental practice of Emerson Collective. In 2015, he retired as director of the U.S. Department of Energy’s National Renewable Energy Laboratory.

Floros is dean of the College of Agriculture and director of K-State Research and Extension at Kansas State University. He has led the development of the college’s strategic plan and guided the college to record student enrollments, retention and graduation.

The selections were announced during the May 11 Board of Regents meeting.

Regents Chair Debra Hicks said the Regents focused on finding a leader who is innovative, strategically investment-oriented, decisive and a respected visionary.

“They need to have the ability to assess and leverage all campuses,” she said, and put in place plans “that will place this institution on a trajectory to a sustained, successful future.”

She said the new leader must be able to “engage a diverse community of multiple stakeholders with regard and respect to shared governance, build effective, cross-pollinated teams and external partnerships, remove the silos and break through traditional barriers, and create a culture of innovation and collaboration. They must produce meaningful and measurable outcomes that enhance the well-being of the citizens of New Mexico and beyond.”

“I am immensely proud as an Aggie to be coming home,” Arvizu said. He said he has been in communication with Floros, who was unable to attend the meeting, and said the two are aligned in their thinking about moving the university forward.

Arvizu read a statement from Floros.

“I am deeply honored and delighted to be given this tremendous opportunity by the Board of Regents to lead as the new president of NMSU as it plays a vital role in the state, the nation and, increasingly, the world beyond our national borders,” Floros said. “Dr. Arvizu and I have many ideas and we have discussed those. Before we put them in place, we would like to listen to our faculty, to our staff and to our students. We would like to discuss those ideas with our administration and leadership teams and then prioritize that based on those discussions into an action plan.”

Arvizu is set to start on May 21. He succeeds current Chancellor Garrey Carruthers, who has led the university since 2013 and will retire on July 1.

Arvizu has had a long, distinguished career in advanced energy research and development, materials and process sciences, and technology commercialization. He started his career in 1973 at Bell Labs, and after four years transferred to Sandia National Labs, where he spent the next 21 years, 14 years in executive roles. In 1998 he joined CH2M Hill Companies, Ltd for six years, his last two years as a CTO.

In January of 2005 he was appointed the eighth director of the U.S. Department of Energy’s National Renewable Energy Laboratory in Golden, Colorado, and became the first Hispanic lab director in the history of any of the 17 U.S. DOE’s National Labs. He retired in December of 2015, and is presently director emeritus.

Floros became dean of the College of Agriculture and director of K-State Research and Extension in July 2012. Since then, he has led the development of a College of Agriculture strategic plan for Vision 2025, guided the college to record student enrollments, retention and graduation, and nearly 100 percent placement.

As director, he steered K-State Research and Extension – an entity with faculty and staff in five colleges: Agriculture, Arts & Sciences, Engineering, Human Ecology, and Veterinary Medicine – to record extramural funding, with research expenditures of more than $105 million.

Under his leadership the College of Agriculture established the first ever NSF-supported Center on Wheat Genomics; and four new Feed-the-Future Labs from USAID on wheat, sorghum and millet, postharvest loss reduction, and sustainable intensification, for a total investment of more than $100 million in five years.