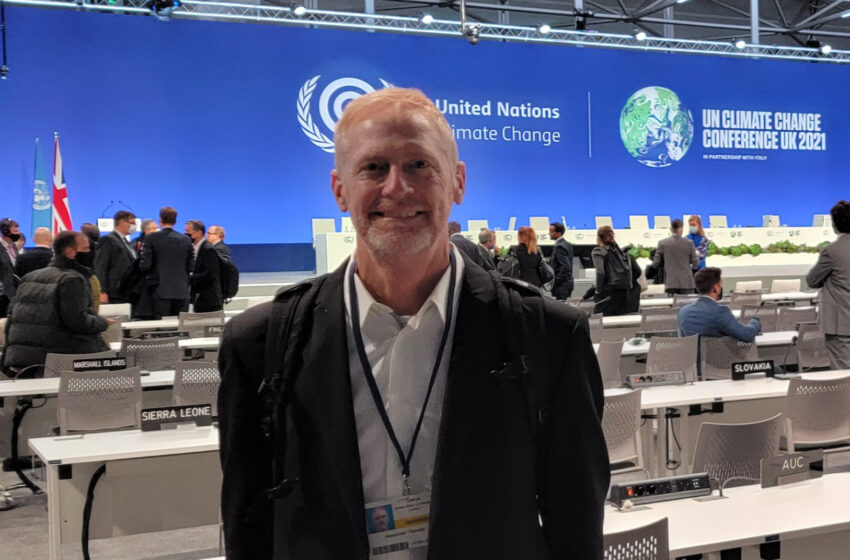 His research has taken him to Chile, Argentina and now the United Kingdom, where he’s currently working as a Fulbright Scholar on a collaborative project based at Queen Mary University of London to study the effects of groundwater pumping on rivers.

Fernald, director of the New Mexico Water Resources Research Institute at NMSU, received a Fulbright Scholar award in March – his third since 2000 – and relocated to London in August to work on the project. His collaborators include Professors Mark Trimmer and Kate Heppell of Queen Mary University of London and Professor Andrew Binley of Lancaster University.

The research team’s work centers on examining biogeochemical, hydrologic and water-quality processes on rivers in the U.K.

“I was pretty fortunate because I found this university through Fulbright,” Fernald said. “Mark Trimmer and Kate Heppell were both doing different aspects of this project, but they hadn’t really looked at the impacts of water management on these instream processes. I’m helping them analyze data they’ve collected but haven’t yet analyzed.”

Fernald said he’s bringing a systems-modeling approach to the project. He explained that modeling of coupled human and natural systems will show how scenarios of climate change and nonpoint source pollution could negatively impact water quality. He added that modeling will also guide policy for groundwater pumping and land-use management to improve water quality.

As part of his Fulbright activities, Fernald represented Queen Mary University of London as an observer at the 2021 United Nations Climate Change Conference, or COP26, in Glasgow in November. As part of the Research and Independent Non-Governmental Organizations constituency at the climate talks, Fernald said he learned about maladaptation and climate change impacts on the water cycle.

“Climate change is causing water cycle intensification with more droughts and flooding,” he said. “Adaptation should not only respond to the impacts of climate change but avoid create additional problems. Groundwater pumping to offset reduced surface water availability can then cause its own problems and be an example of maladaptation.”

Fernald, who will remain in London through February 2022, believes his research will be applicable in New Mexico, despite its differences with the U.K.

“We’re really interested in New Mexico about groundwater pumping effects on river function. There are important issues right now with groundwater pumping and how it affects river flow,” he said, noting a years-long water-rights battle between New Mexico and Texas. “Water scarcity is such an important issue around the world. In England, the total quantity is less of an issue than the timing and location of water use. Those issues are also important in New Mexico. I’m working on system dynamics modeling to show the effects of management on these natural processes that will hopefully be useful in New Mexico.”

For Fernald, some of the highlights of working in London include visiting historical sites around the Hampshire Avon catchment in southern England, where the research team collected samples. One of those sites is the Stonehenge landmark, which stands along the river’s main stem; another is the town of Christchurch, home of a 15th-century Priory and the Royalty Fishery, which sits where the river empties into the English Channel.

“The history is great and gives you a neat perspective on sustainable resource management,” he said. “The river was a focus for the people of Stonehenge. Downstream, they’ve been salmon fishing, and they specifically set aside the Royalty Fishery for careful management almost 1,000 years ago. It’s been a good perspective on the importance of the long-term perspective for sustainable water resources management.”

Fernald said Fulbright awards are extremely competitive in London, especially in the area of environmental science, and described the application and interview process as “rigorous.” He said he was pleased to receive the award because that meant he’d have the opportunity to showcase some of his New Mexico-based research to other scientists.

As a Fulbright scholar, Fernald said he’s not just a visiting researcher but also a representative of the United States. The Fulbright Program is the U.S. government’s flagship international educational exchange. Since 1946, the program has provided more than 400,000 participants from more than 160 countries the opportunity to study, teach and conduct research, exchange ideas and contribute to finding solutions to shared international concerns.

“That’s what’s really neat about being a Fulbright Scholar,” he added. “It’s a mix of making sure you’re doing a top-notch project, but also that you’re interested in being an emissary of the U.S. and learning more about the host country.”