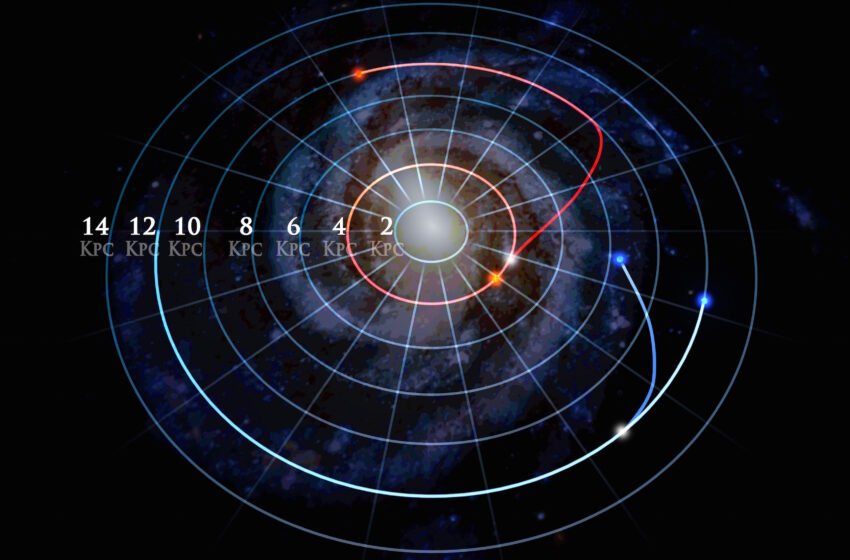 LAS CRUCES, NM – New Mexico State University researchers are part of a team of scientists with the Sloan Digital Sky Survey (SDSS) who created a new map of the Milky Way that shows nearly a third of the stars have dramatically changed their obits.

This discovery, published in the July 29 issue of “The Astrophysical Journal,” brings a new understanding of how stars are formed, and how they travel throughout our galaxy.

“In our modern world, many people move far away from their birthplaces, sometimes halfway around the world,” said Michael Hayden, NMSU astronomy graduate student and lead author of the new study. “Now we’re finding the same is true of stars in our galaxy – about 30 percent of the stars in our galaxy have traveled a long way from where they were born.”

For the last six years, NMSU astronomers in the College of Arts and Sciences, along with collaborators from member institutions around the world, have been using the 2.5-meter SDSS telescope at the Apache Point Observatory, located in the Sacramento Mountains about 20 miles south of Cloudcroft, to complete a suite of experiments that includes studies of Milky Way stars to unlock the history of our galaxy.

The key to creating and interpreting this map of the galaxy is measuring the elements in the atmosphere of each star. “From the chemical composition of a star, we can learn its ancestry and life history,” said Hayden, who is completing his Ph.D. at NMSU this summer.

The chemical information comes from spectra, which are detailed measurements of how much light the star gives off at different wavelengths. Spectra show prominent lines that correspond to elements and compounds. Astronomers can tell what a star is made of by reading these spectral lines.

“Stellar spectra show us that the chemical makeup of our galaxy is constantly changing,” said Jon Holtzman, NMSU astronomy professor who was involved in the study. “Stars create heavier elements in their cores, and when the stars die, those heavier elements go back into the gas from which the next stars form.”

As a result of this process of “chemical enrichment,” each generation of stars has a higher percentage of heavier elements than the previous generation did. In some regions of the galaxy, star formation has proceeded more vigorously than in other regions – and in these more vigorous regions, more generations of new stars have formed. This means the average amount of heavier elements in stars varies among different parts of the galaxy. Astronomers then can determine what part of the galaxy a star was born in by tracing the amount of heavy elements in that star.

Hayden and his colleagues used APOGEE data to map the relative amounts of 15 separate elements, including carbon, silicon, and iron for stars all over the galaxy. What they found surprised them – up to 30 percent of stars had compositions indicating that they were formed in parts of the galaxy far from their current positions.

When the team looked at the pattern of element abundances in detail, they found that much of the data could be explained by a model in which stars migrate radially, moving closer or farther from the galactic center with time. These random in-and-out motions are referred to as “migration,” and are likely caused by irregularities in the galactic disk, such as the Milky Way’s famous spiral arms.

Evidence of stellar migration had previously been seen in stars near the sun, but the new study is the first clear evidence that migration occurs throughout the galaxy.

Future studies by astronomers using data from SDSS promise even more new discoveries.
“These latest results take advantage of only a small fraction of the available APOGEE data,” said Steven Majewski, the principal investigator of APOGEE. “Once we unlock the full information content of APOGEE, we will understand the chemistry and shape of our galaxy much more clearly.”

NMSU has already begun Phase IV of SDSS, the next six-year mission, which runs through 2020. It will include data from the Sloan telescope at Apache Point Observatory and an additional telescope in Chile, adding to the database with a better view of the southern sky.