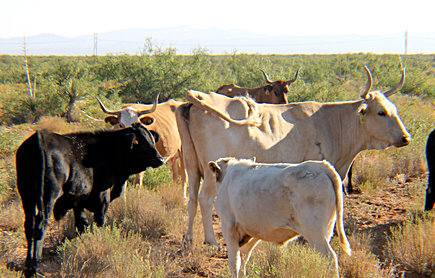 Sustainable beef production is a challenge in the semi-arid rangeland environments of the Southwest. Climate change may reduce the ability of these ecosystems to support herds of large-frame breeds that dominate the American cattle industry.

New Mexico State University, in collaboration with Texas A&M AgriLife Research and a network of institutions and ranchers, is studying ways to improve the sustainability of beef production in the Southwest.

A win-win situation for the environment and the rancher could be integrating heritage cattle into cattle herds.

Through grant funding from the U.S. Department of Agriculture National Institute of Food and Agriculture, the researchers are evaluating crossbreeding heritage Raramuri Criollo cows with the traditional beef bulls.

Since 2011, the environmental benefits of Raramuri Criollo cattle have been studied by the USDA Agricultural Research Service at the Jornada Experimental Range in south-central New Mexico, in collaboration with NMSU researchers.

Raramuri Criollo cattle have adapted to harsh conditions over the centuries since they were introduced to the New World in the 1600s. The Tarahumara people of the Copper Canyon in Mexico have raised these cattle for more than 400 years for milk, meat and use as a draft animal to plow fields.

While the smaller-statured Criollo grazing behaviors are better for the environment in those harsh landscapes, the marketability of the calves is not profitable for a rancher.

“One of the problems with the Criollo breed is that the calves are small at weaning compared to traditional beef breeds, so a rancher has to develop them for a longer period of time before sending them to market,” said Andres Cibils, NMSU College of Agricultural, Consumer and Environmental Sciences professor. “When the producer gets the calves to the sale barn, the buyers pay less for the Criollo breed.”

NMSU and Texas A&M AgriLife Research have begun a three-year study in which Criollo cows will be bred with Brangus, Angus and Red Angus bulls at ranches in southern New Mexico, southern California and southeast Utah.

The first good news is that the calves are approximately all the same size.

“The crossbred calves are larger than a normal Criollo calf,” Cibils said. “We don’t see a huge difference between the two groups. The crossbreds are usually hornless and typically tend to have a single color coat, which is not typical of the Criollo breed.”

The first cohort of 120 calves has been sent to NMSU’s Clayton Livestock Research Center for backgrounding before being divided between the Clayton feedlot and Texas A&M AgriLife Research feedlot in Bushland, Texas.

The animals will be pastured on a new variety of winter wheat that Texas A&M University has developed, one specifically designed for high grazing performance on winter pasture.

The meat quality data will include an evaluation of the taste of the beef.

The ultimate goal of this study is for ranchers to be able to have a cow/calf operation with a traditional beef breed bull and a herd of Criollo cows, whose behavioral traits may be more environmentally sustainable on arid rangelands, especially under the impending threat of climate change, than those exhibited by more traditional beef breeds.

“Hopefully, the study will show through crossbreeding, the rancher can produce a competitive beef calf while surviving in the semi-arid environment of the Southwest,” Cibils said.