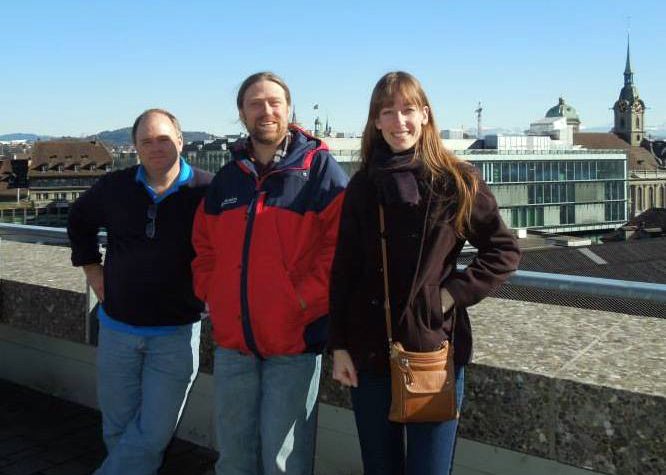 The Department of Astronomy at New Mexico State University contributed a large part to a recently released book, which is the first completely dedicated to examining the history and science of dust devils on Earth and on Mars.

Lynn Neakrase is a senior research scientist in NMSU’s astronomy department and co-author of four chapters of “Dust Devils.” Other co-authors include James Murphy, astronomy professor and interim associate dean in the College of Arts and Sciences, Kathryn Steakley, astronomy graduate student, Melinda Kahre, a space scientist at NASA Ames Research Center who received her doctorate in astronomy at NMSU, and Martina Klose, a visiting scientist from Germany who spent the last two years working on a different project at the Jornada Experimental Range.

“I did my Ph.D. at Arizona State University in Tempe and I performed lab experiments by creating dust devils,” Neakrase said. “That’s how this kind of started.”

Neakrase and his fellow researchers studied sediment flux, how much dust devils can lift,  and soon they asked the question: How does sediment flux change in a different meteorological environment?

“When I was at ASU, we had access to NASA’s Ames facility and we could take my lab equipment that creates dust devils and stick it in a chamber there and pump everything down to Mars’ ambient pressure,” Neakrase said.

This allowed Neakrase to simulate Mars’ air density and how that affects the intensity of dust devils on Mars.

Dust devils form because of solar power,” Neakrase said. “The sun heats the ground, then convection comes off the ground and with a little bit of wind, it can get wrapped around this convection.”

This is why dust devils are more common in the summer and spring months than in the winter and fall.

Based on this research, Neakrase and several co-authors wrote the first book to be wholly dedicated to dust devils research.

“We convened a special workshop at the International Space Science Institute in Bern, Switzerland,” Neakrase said. “ISSI has a whole series of books that come out on specified topics.”

About 40 people, researchers and students, attended the workshop, a summit of dust devil experts.

Dust devils were first identified on Mars in 1971, when several orbiters were launched into space. These orbiters flew over Mars and photographed the surface of the planet.

“Because Mars is so dry and arid, dust devils work like vacuum cleaners,” Neakrase said. “There’s crisscrossing patterns all over Mars that show these tracks.”

Since 1971, with higher-resolution cameras, astronomers have been able to capture footage of dust devils forming and crossing the topography of Mars.

With this data, astronomers might also be able to prepare technology to allow human exploration of Mars.

“Dust is clearly going to be one of the biggest hazards we face as humans when we go to Mars,” Neakrase said.