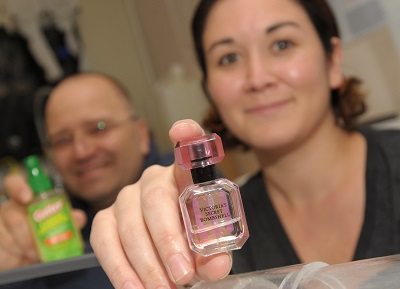 If you have a recipe for homemade mosquito repellent, two New Mexico State University professors want to hear about it.

Mary Alice Scott, assistant professor of anthropology and Immo Hansen, associate professor of biology in NMSU’s College of Arts and Sciences have created an online survey to discover people’s homemade mosquito repellents. They hope to get responses from all over the world.

The survey takes about five minutes and is available online. To encourage participation, the researchers are offering $50 and $100 gift cards as prizes.

“This project aims to find techniques and strategies that people in different parts of the world use to protect themselves from mosquitoes,” said Hansen. “You know the story of Victoria’s Secret Bombshell perfume.” Hansen referred to the testing of mosquito repellent sprays conducted in Hansen’s Molecular Vector Physiology Lab in 2014 in which the perfume out performed some commercial mosquito repellents.

The perfume’s mosquito repellent success gave him the idea of looking for more do-it-yourself bug sprays to test. He contacted Scott, a medical anthropologist at NMSU whose research interests include the examination of health and illness production, to collaborate on the project.

“I’m a qualitative researcher so the idea is that once we have a better sense of what’s out there that we would go to different places in the Americas and actually do more in depth interviews with people,” Scott said. “It’s difficult to design the interviews unless we know a little bit more about what’s out there.”

The two plan to take results of the online survey to write a grant to fund fieldwork and to pursue testing of the homemade repellents they find through the survey.

Initial results have already turned up some unusual answers. For example, there are a variety of herbs that some people burn to repel mosquitoes. They have also discovered many people use citronella candles despite research that has shown they are not an effective repellent.

Research in Hansen’s lab has proven the most effective insect repellent is DEET. During Scott’s field work in rural Veracruz, she discovered the cost of insect repellents containing DEET is so high that most in the local community could not afford it, so alternatives had to be found. Scott also says there are other environmental and health concerns about the chemical that may encourage some individuals to make their own mosquito repellent.

“In rural Veracruz, people can’t spend $5 on bug spray,” Scott said. “There are many reasons to approach this project and cost is one.”

The researchers will continue the survey through the end of the summer. They plan to write a paper with the preliminary results, and then they expect to begin the second phase of the project next summer to do field research in other countries.