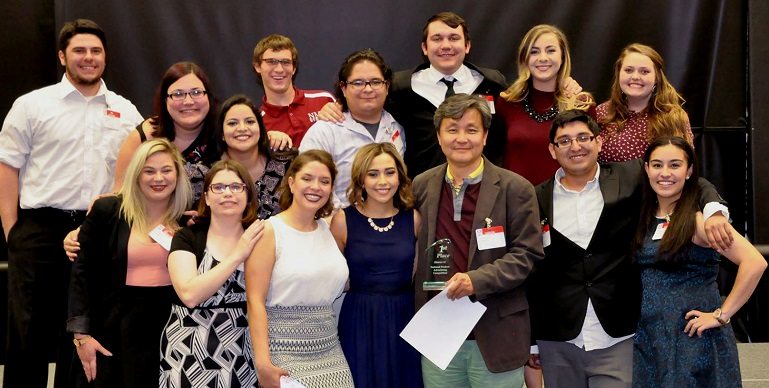 A team of journalism and mass communications students at New Mexico State University under the American Advertising Federation brought home a first place win in the organization’s district competition this spring in Salt Lake City — a first for the team and for the university.

American Advertising Federation is an advertising trade association representing all facets of the advertising and marketing communications industry. NMSU’s chapter with 15 members is one of more than 200 college chapters nationwide.

Every year, the organization partners with an iconic brand for the National Student Advertising Competition. This year’s sponsor was Snapple.

“We were really excited that our client was Snapple this year. It’s a brand we could all relate with well,” said Amanda Getchell, who graduated in May with a degree in journalism and mass communications from NMSU’s College of Arts and Sciences. “It was a quirky brand that made the creative aspect a lot more fun.”

This year, the competition required all college chapter teams to develop an integrated marketing communications campaign. The plan needed to have all the components for the company to raise awareness of their brand and to increase the frequency that customers purchase the product. Each team was also given a scenario budget of $50 million that they had to divide up for every expense in their campaign.

The NMSU team’s slogan was “Snapp Outta Ordinary”. Team members said their objective was for others to get out of their everyday rut, jump into adventure, and drink the drink that will help them get there.

NMSU AdFed also developed a campaign called “Snapp Across America.” With this campaign, the team focused on the concept of “experience” with a road trip for their target market.

“Snapp Across America” had a two vans driving across the United States and stopping in certain cities for a Snapple-sponsored event. The team even created an app for customers to track the van, see where its next stop is, and learn Snapple facts.

Team members say that one of the most rewarding parts of this project for the students was getting very real, hands-on experience for what working in advertising and marketing communications may actually be like.

“Through this project, I learned the power of teamwork, strong leadership and how demanding the real world is,” said Brian Toles, an upcoming senior at NMSU double majoring in journalism and mass communications and marketing. “Being part of the creative team, I saw firsthand how little details made a world of a difference.”

At times Toles said it was difficult having to go back and fix the same thing over and over again but he saw it as an example the real world. “Working in the marketing and advertising fields, it’s not about what you want,” he said, “it’s about what your client wants, and this project really helped solidify that idea.”

Hwiman Chung, department head for Journalism and Mass Communications, said the department’s advertising track focuses greatly on giving student’s real-life experiences before graduating. “AdFed has helped these students put the things they learn in class into another perspective, and apply what they learn into real projects,” he said.

To learn more about the American Advertising Federation, visit http://www.aaf.org/