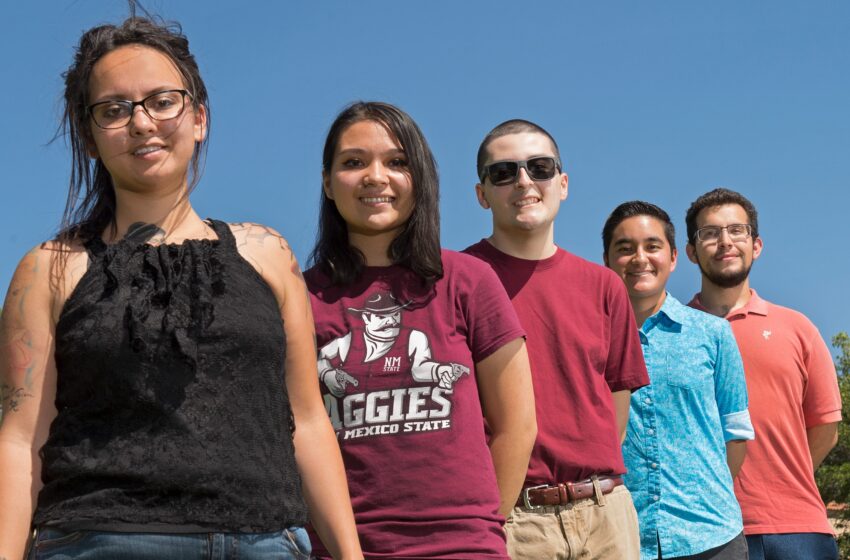 As classes get underway at New Mexico State University , five NMSU computer science students ranging from sophomores to seniors are spending the fall semester at Google in San Francisco.

It’s the second year of a pilot program initiated by the tech giant. This year, they selected students from three Hispanic Serving Institutions to take classes at Google for a semester and benefit from the Google culture.

Last year, the company invited students from Howard University, among the country’s Historically Black Colleges and Universities, to learn at the Google campus.

“It’s like you’re going to school in the workplace, said Enrico Pontelli, Dean of the College of Arts and Sciences, who negotiated NMSU’s participation in the project. “It’s the best of both worlds merged together. It’s a very interesting design. I haven’t seen it anywhere else. This is a first.”

It’s like a regular semester, Pontelli explained. The students will take courses as they would otherwise but those courses will be attached to a project they are given by Google. They also will have Google mentors and access to professional skills training and interview sessions with other company’s representatives.

Marco Salazar, a sophomore computer science major who is interested in pursuing a career in video game development or artificial intelligence, is looking forward to the experience.

“I expect a rigorous training in the classes that I have signed up for, which is to be expected from an industry leader like Google,” Salazar said. “I understand that many of the projects we will be working on will be team-based the way it normally is in industry. We will have an expert professor teaching us, and a Google employee mentoring us for each of our classes. I expect this to be an invaluable experience that will greatly help me in the future.”

Kay Sweebe, a double major in computer science and mathematics, plans to spend time networking as the group tackles Google projects as part of the program.

“I’m specifically interested the problems we face currently with big data in our society,” Sweebe said. “A couple classes I will be taking at Google are Algorithms and Machine Learning. Both of these classes have implementations within big data to help solve some of the problems we currently face with large data sets.”

Another double major in computer science and mathematics, Vensan Carbardo, a sophomore at NMSU, has lived in New Mexico most of her life and hopes a semester at Google will expand her horizons.

“I hope that, by participating in this program, I can start getting more accustomed to being outside of my comfort zone. I don’t believe that sticking to safe and familiar routines is beneficial for anyone; especially computer scientists, and I expect that this program will help me become more comfortable with approaching problems in new and unfamiliar ways.”

Pontelli says the company is looking to diversify its workforce and find the best employees by reaching out to minority serving institutions. Three of the five NMSU students attending the Google pilot this semester are women. NMSU’s Young Women in Computing program, which has engaged thousands of middle and high school girls in learning computer science over that last 10 years, has created a pipeline of female computer science majors for NMSU.

Pontelli is impressed by the way Google has incorporated the learning experience into their company culture.

“And the students’ connection with Google is going to be developed. It’s going to be a great learning experience. The skills they’re going to get, not just the technical skills, but also the professional skills, the job interviews, the teamwork, understanding the culture. You can get some of that with an internship, but this is better than an internship.”

Jacob Espinoza, a senior computer science major, likes the idea of getting access to learning at Google without the pressure of a regular internship. “Artificial intelligence interests me the most and I think my experience at Google will give me a greater insight as to the developments in the field.

“Google has been one of the leaders in AI over the past few years as evidenced by projects such as their self-driving car program and the Google Assistant. Being at Google, I am sure I will see both the advances and the challenges that face the AI field today.”

Arianna Martinez, a junior computer science major who wants to work at Google or Amazon as a software engineer, is grateful she was among the handful of students selected for the Google pilot. “I expect to gain hands-on experience and knowledge from Google engineers that I wouldn’t get anywhere else. I hope to make friends and learn so many new things while I’m there.”

As well as meeting new friends, the students will be connecting with NMSU alumni who already have jobs at Google. Natasha Nesiba, is part of that Google welcoming committee for the NMSU group. She received a scholarship from Google as an undergraduate but turned into a scholarship for another student and earned her bachelor’s and master’s degrees at NMSU.

“We want this to continue and grow. It’s important that the students must have a great experience,” Pontelli said. “But we need to make sure we pay them and we need to figure out how to finance sending the students there and where they will live.”

When the students return after the semester at Google, they will share what they’ve learned with their peers at NMSU next semester. Pontelli is hopeful the program will continue to expand each year and become sustainable in the future.

“The people from Google are good to work with, very collegial, very open,” Pontelli said. “I do trust them, theyre sincere in what they’re trying to do. I think they really want to make a difference.”