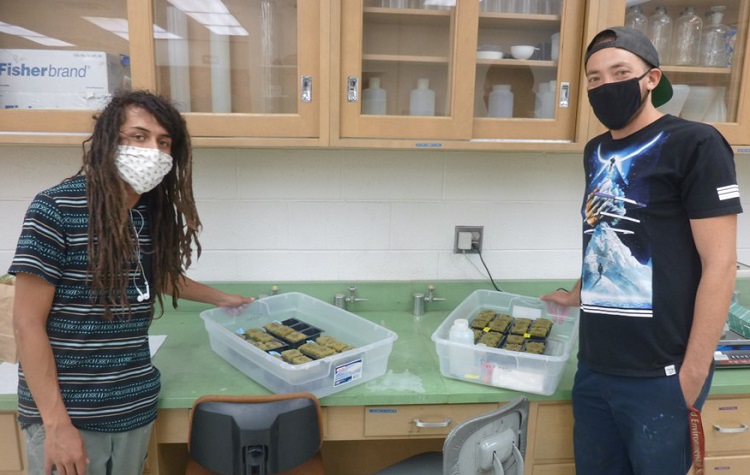 In one project, students in Geno Picchioni’s upper-division greenhouse management class in NMSU’s College of Agricultural, Consumer and Environmental Sciences grew hemp cultivars in a supervised classroom setting as part of a research project last fall.

The 2018 United States farm bill removed hemp from the federal government’s most restrictive classification of controlled substances, which paved the way for American farmers to cultivate and distribute hemp as an agricultural product. Hemp, a variety of Cannabis sativa, is commonly grown for industrial uses but must contain less than 0.3 percent of THC, the psychoactive ingredient of cannabis.

Picchioni completed the approval process in time for the fall 2020 semester.

“We intended to grow hemp vegetatively, not to grow flower buds for the medicinal part,” he said. “Our main objective in the long-term is to evaluate salt tolerance because we’re becoming more reliant on impaired water sources.”

While adhering to NMSU’s COVID-19-safe classroom practices, the students sprouted hemp seeds in blotters and planted them in rockwool cubes during the first week of the study. The students then subirrigated the plant cubes at a nitrogen level of 100 ppm after transferring to a campus greenhouse.

A week later, the students moved the plants into shoebox hydroponic tubs, maintaining the nitrogen level of 100 ppm. During the third week of the study, the students increased the nitrogen level to 200 ppm for half of the samples. By the time the study concluded in early October, the plants had spent 26 days in hydroponic culture, with 19 days in differential nitrogen treatments.

Near the end of the study, some plants experienced lodging, a condition referring to the displacement of stem and roots of plants from their proper and vertical placement. Phillip Lujan, a plant diagnostic specialist at NMSU, confirmed Pythium stem rot was causing the lodging.

“He informed us future research with this hydroponic system should aim to eliminate high moisture levels in the upper portion of the rockwool cubes,” Picchioni said.

At the end of the semester, the students provided an online lecture to the entire class, covering their hemp experience.

“The most important thing I learned was using appropriate-sized containers because we had small systems. That’s probably the biggest takeaway from this experiment,” said horticulture student Christina Perez, who completed the project with fellow students Skyler Stinson, Joseph Delgado, Andrew McConnell and Matthew Capanna.

Another student, who was in the same class of 24 students but was part of a separate project, said growing plants in a classroom setting provided a richer educational experience.

“It’s nice to have this kind of opportunity instead of just reading stuff out of the book. It was great to be able to do it and see it,” horticulture student Derek Baker said.

Picchioni said the study provided preliminary data that may help refine the culture system to conduct plant-nutritional and salt-tolerance research. He plans to run a similar study with a new class of students during the fall 2022 semester.

“It’s not going to solve the challenges for the hemp growers at this moment in time,” he said. “But if we keep pushing, it might very well get to the point where we can develop a good culture system and study some of the pressing issues associated with drought and water quality.”