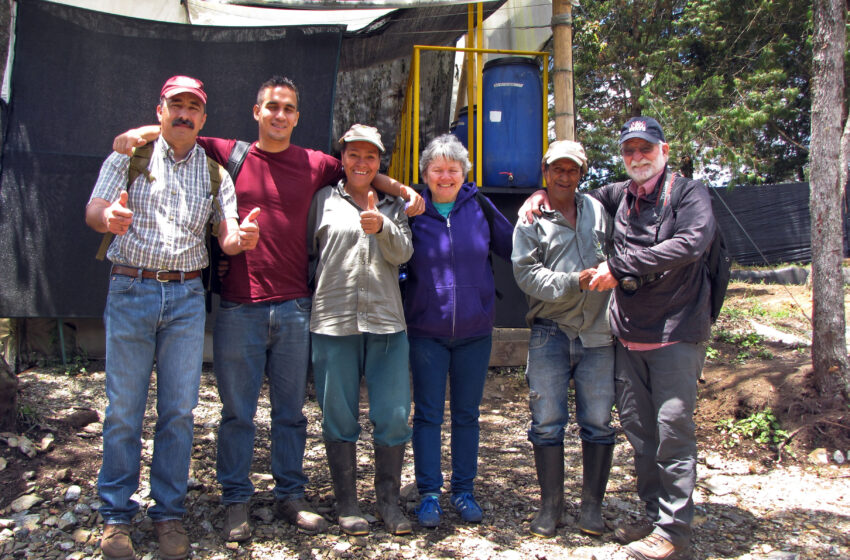 New Mexico State University is helping post-conflict Colombia get back on its feet through the U.S. Agency for International Development’s Farmer-to-Farmer program, and now volunteers are sharing their stories.

The F2F program is sending 10 volunteers to Colombia from January until June 2018. Thomas Dominguez and Michael O’Neill are the program’s second and third volunteers to go and visited Colombia in March.

Michael O’Neill, retired NMSU Professor of Agronomy in the Department of Plant and Environmental Sciences:

Q: How did you learn about the opportunity to volunteer?

I first started working with the University of La Salle on a joint proposal with NMSU in 2014. I led an NMSU student and faculty exchange group to Colombia in November 2014 to foster cross-cultural experiences and teach at the La Salle Utopia project, an agricultural campus in Yopal, and at the main campus in Bogota.

In 2015, a reciprocal student and faculty exchange group came from the La Salle Utopia campus to the NMSU campus in Las Cruces for a similar educational and cross-cultural experience. In 2016, I returned to La Salle to teach a three-credit course in World Food Security for their International Summer Academy.

In March through April of 2017, I went to Mali in West Africa on a Farmer-to-Farmer volunteer assignment with Common Pastures, a non-governmental organization, working with womens groups to identify strategies for increasing the productivity of small ruminants, which are primarily the responsibility of women.

Since I had worked for over two decades in international agricultural research and development, primarily in Africa, had a strong relationship with La Salle in Colombia, and was familiar with the Farmer to Farmer program, I jumped at the chance to apply for this F2F project when the application announcement was issued in December 2017.

Q: What did you do while in Colombia?

In addition to meetings at the Salva Terra headquarters over the two weeks, we visited Salva Terra organic garden operations with homeless men and LGBT community members and a Green Belt terraced garden in Medellin. We also visited a Salva Terra research garden and fertilizer tea production facility in the Arvi National Park and several school and community gardens in the Montes de Maria area of northern Colombia.

We had meetings in Bogota with representatives from the Tropical Agricultural Research and Higher Education Center and with the Director of the University of La Salle International and Inter-Institutional Programs Office. We also traveled to the Utopia project campus in Yopal to meet with students and faculty to get a better understanding of the potential role that the campus could play in an enhanced education and research extension system.

Q: What was your favorite part of the trip?

What impressed me the most was the determination and tenacity exhibited by Salva Terra management and personnel to address the issues of rural poverty, food insecurity and environmental degradation through organic gardening and capacity development in areas torn by drug war trade. I was also pleased to meet agricultural agents working for, or collaborating with, Salva Terra projects in rural areas who were graduates of the University of La Salle Utopia campus in Yopal. It was extremely gratifying to learn that the students we visited in 2014 had graduated and found ways to be associated with Salva Terra and put their education to use.

Q: What did you do while in Colombia?

I met with the host, Salva Terra Foundation, to understand the function, management and operations of the foundation with regard to delivery of agricultural information and training to small farmers. I also met with University of La Salle Agricultural researchers to understand how research is targeted and pushed out to producers, shared with other researchers funneled into and through Utopia project, and met with Utopia project researchers to understand how research is developed as part of curricula for training prospective graduates and junior field agents.

Q: What was your favorite part of the trip?

The chance to work with a group excited about starting an extension methodology in a country post-conflict. I could imagine the feelings of extension personnel in 1862 and 1914 in this country with the beginning of Extension and the land-grant university system. That is what Colombia is going through now in 2018.

Q: Why would you recommend for other people to volunteer with this program?

It’s a very exciting opportunity. Lots of hard work but very satisfying and exciting to be a part of something greater than yourself. Also,

Extension and Agriculture Education is a way to advance a country’s economic and cultural prosperity.

There are still seven more volunteers that will go to Colombia. The volunteers include professors, extension agents, one graduate student, and researchers who specialize in certain areas, such as water research.

For more information about the program, please visit the Farmer-to-Farmer website.