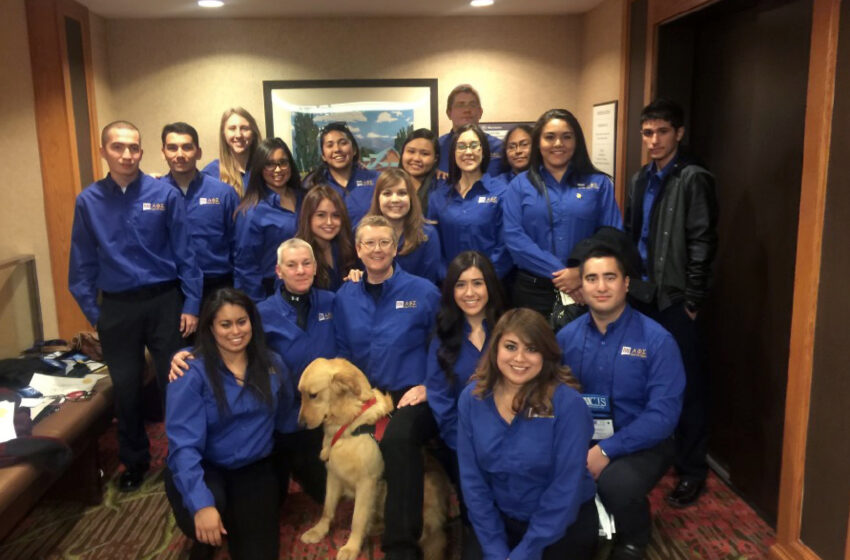 This year, they created their own.

The grim display – which featured an NMSU criminal justice alumnus playing dead on a cold, hotel bathroom floor – was created for the Crime Scene Investigation portion of this year’s conference, held from March 29-April 2 in Denver.

After winning last year’s CSI category, the group was charged with creating their own scenario for the other schools to analyze. To make the spectacle as true-to-life as possible, Alpha Chi Alpha consulted local law enforcement.

“Once we had the script, we made an appointment with the Las Cruces Police Department,” said Andrea Joseph, Alpha Chi Alpha faculty adviser and college associate professor of criminal justice in the College of Arts and Sciences. “I think it was a really great learning experience for the students.”

Altogether, the team brought home a dozen prizes, including a Student Achievement Award, presented to Lopez, and the Regina Shearn Scholarship, which was awarded to Ashlerose Francia, an undergraduate government major. These highly competitive awards are based on academic performance, leadership, research, service and chapter contribution.

While all students across the 246 active Alpha Phi Sigma chapters are eligible to apply for these scholarships, Joseph explained that several members from the NMSU chapter have earned these accolades in recent years.

“These are awards that you don’t have to be present at the conference to win,” Joseph said. “So to consistently win these scholarships is phenomenal. It’s not just about the competition we do at nationals.”

But they succeed on that front, as well.

This year, the NMSU chapter received the Star Chapter Award, the Goal Award for Unity, as well as two Outstanding Graduate Papers and one Outstanding Undergraduate Paper. The team also placed in the T-shirt and website competition, with a couple members receiving participation scholarships.

The 12-hour days encompassed presentations, exams, a mock trial and a knowledge bowl, which the team took third place in. There were also plenty of opportunities to network, which Joseph says is one of the most important aspects of attending the conference.

“It’s valuable on so many levels,” she said,” but the networking with their peers and professionals is outstanding.”

Students heard from a number of speakers, including a networking presentation on employment in the criminal justice field, as well as a keynote talk on juvenile rehabilitation by Gabriel Hernandez, the director of Denver’s Connection Youth Center. Conference presentations also incorporated a Student Paper Panel, where three of the four presenters were NMSU team members.

Awards aside, Joseph, who has served as NMSU Alpha Chi Alpha faculty adviser since 2010, considers the progress she sees in her students to be the “greatest gift.”

“I just love to see my students grow and develop,” she said. “Every year, I think ‘how am I going to do this next year with a whole new bunch?’ And then here comes another bunch and they’re just as phenomenal.”

At this year’s conference, Joseph was selected as Adviser of the Year, an honor she also received in 2014.

“She always wants the best for us all,” Lopez said. “As a mentor, she has really helped me blossom into the leader I am today, and has always opened her heart to not only me but to other members of the organization and students at NMSU. Year after year, she continues to prove what great knowledge and wisdom she has to offer all of us.”