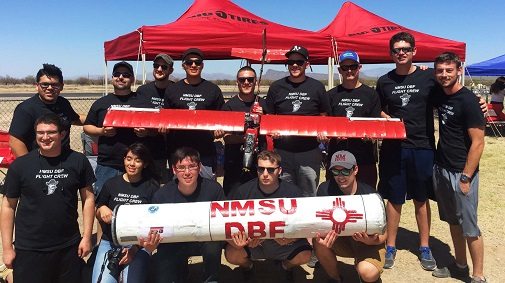 In this competition, teams must design, manufacture and exhibit the flight capabilities of an unmanned, electric-powered, radio-controlled aircraft. The two-semester project began in the fall. For only the second year, teams are required to submit a proposal by October, and of the 135 submitted proposals 104 teams qualified to proceed.

In February a 60-page design report was required and then 95 teams were selected for the April competition. Last year, NMSU didn’t advance through the proposal stage.

“I am very proud of the team, their dedication and hard work over two semesters and their outstanding performance at the competition,” said Andreas Gross, team adviser and mechanical and aerospace engineering assistant professor.

Every year the design requirements and performance objectives change to encourage creativity and innovation. This year’s objective stated the aircraft was required to fold into a tube, to self-lock into the flight configuration, and to carry a payload of three hockey pucks.

“It was so hectic going into the last night of competition. We were realistic and didn’t think we would be able to fly all three missions and drop our tube, but everything went according to our design and we were thrilled,” said Kyle Edgerton, team leader, pilot and aerospace engineering senior.

This year, NMSU’s team, which consisted of 16 members, completed all five possible missions. While five flights aren’t necessary it allows teams to improve scores. Edgerton said the team was happy that its aircraft was not damaged or destroyed in the competition, and they hope to exhibit it in Jett Hall.