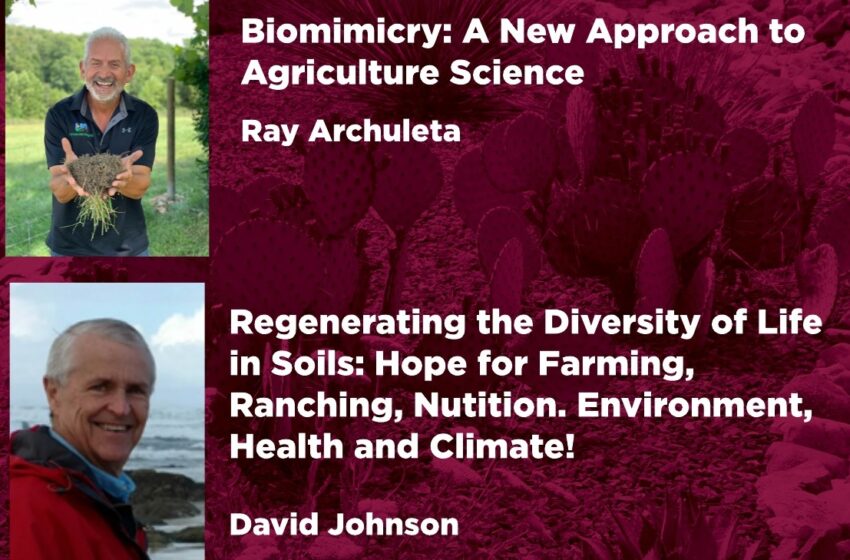 It’s unusual to come across a documentary about climate change that strikes an optimistic note, but that’s what Netflix viewers were treated to last September with the premiere of “Kiss the Ground.”

On April 21, the eve of Earth Day 2021, Archuleta will return virtually to his alma mater to delve more into the promise of regenerative agriculture and its applicability to New Mexico during a 6 p.m. webinar presented by the NMSU Climate Change Education Seminar Series (NMSUCCESS).

Co-presenting with Archuleta will be his longtime friend and colleague David C. Johnson, a molecular biologist and research scientist at NMSU’s Institute for Sustainable Agricultural Research and an adjunct professor at the Center for Regenerative Agriculture and Resilient Systems at California State University, Chico.

The pair met in 2014 at an organic farming conference in Albuquerque and became friends over their shared scientific interests and passion to help both farmers and the land.

During the regenerative agriculture webinar, Archuleta will present first, providing an overview to this sustainability-focused farming and grazing approach Johnson will follow, drilling down into the science. Johnson’s research provides insights into the interdependence between plants and the microbial community in soil and highlights a means to significantly increase farm and ranch productivity and profitability while also promoting better ecosystem health.

Johnson’s presentation is titled “Regenerating the Diversity of Life in Soils: Hope for Farming, Ranching, Nutrition, Environment, Health and Climate!”

During his tenure with the NRCS, Archuleta served in New Mexico, Missouri, Oregon and North Carolina. Archuleta received a bachelor’s degree in agricultural biology plus 30 hours of graduate work in soil-related courses from NMSU. He later served two years with the Peace Corps in Guatemala as a livestock specialist.

After retiring from the NRCS in 2017, Archuleta founded Understanding Ag, LLC, and Soil Health Academy, to teach biomimicry strategies and agroecology principles to improve soil function on a national scale. Archuleta also owns and operates a 150-acre farm near Seymour, Missouri with his wife and family.

At 1 p.m. April 22, which is Earth Day, NMSU is also hosting a talk by Michelle Graves, director of the Global Design Challenge and Launchpad for the Biomimicry Institute. This will be followed by a series of ignite sessions – 10 15-minute presentations – from NMSU faculty on their sustainability related research.

For more information and to register for the events, click here.