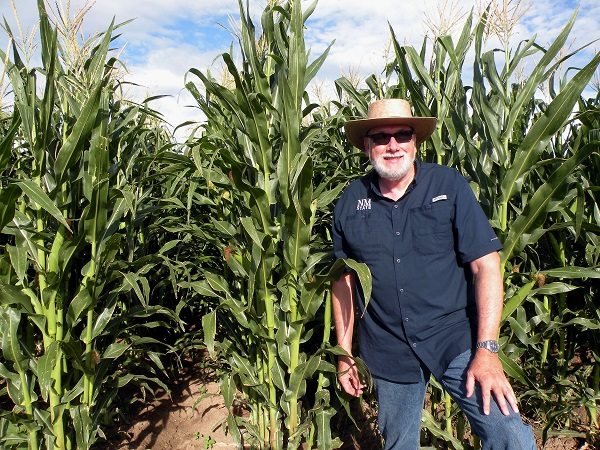 When you listen to Rich Pratt talk about the importance of crops for future generations, you can’t help but hear the sincerity in his voice. Whether it’s addressing crop diseases, limited water resources, soil salinity or high temperatures, Pratt says many crop scientists are in service of mankind.

It was probably his passion and dedication through the years that ultimately led him to be named as the prestigious Crop Science Society of America Fellow. He will officially receive the award in November.

Pratt is a professor of plant breeding and the director of the Cropping Systems Research Innovation Program at New Mexico State University. He joined NMSU in 2011.

The fellow award is the highest recognition bestowed by the CSSA. Recipients are nominated by their colleagues, and only up to 0.3 percent of the society’s active and emeritus members may be elected fellow.

When reflecting upon his reaction to learning he was named fellow, Pratt choked up. But not because of the prestige that comes along with the award. He thought about the late Arden Baltensperger, who received the same honor while at NMSU in 1980. He also thought about the late Billy Melton, who was a well-known alfalfa breeder from NMSU and was named CSSA Fellow in 1984.

“To be included with folks like Arden Baltensperger and Billy Melton is just a real honor,” Pratt said. “Arden Baltensperger was just really a very wonderful department head here. He was responsible for starting the Ph.D. program. I really looked up to him.”

Pratt worked with Melton’s wife, Lois, on establishing the NMSU endowed professorship in the Meltons’ honor.

“Billy Melton mentored a lot of graduate students, and a huge portion of the successful alfalfa breeders in the country had worked with him here,” Pratt said.

“And Arden Baltensperger developed very important turf grass varieties that brought a lot of revenue in royalties into the university, and he saw to it that some of those funds were used to endow scholarships,” he said. “They did pretty great things. To be in their company is a real honor.”

Ultimately, Pratt wants crops to thrive now, as well as in the future. He’s working with native crops and plant genetic resources from the Southwest to preserve and expand their role in desert cropping systems in the future.

Prior to his arrival at NMSU, Pratt spent 23 years at Ohio State University. His research findings there have allowed for new plant breeding methods that will provide natural resistance to devastating diseases around the world.

“Crop scientists are really trying to think ahead and trying to start working on the risks and the problems we’re going to encounter in the coming decades,” he said. “We are concerned about the present tasks we have to address, but we’re also trying to think forward, perhaps more so now than ever.”

Pratt also hopes to create more awareness about native crops and plant genetic resources in the Southwest. In fact, he’s organizing a symposium about these topics that will be held Nov. 8 in Phoenix in conjunction with the CSSA Annual Meeting.

Pratt, who received his bachelor’s and master’s degrees from the University of Arizona and his doctorate from Purdue University, has helped secure almost $5 million in research grant funding since his arrival at NMSU.