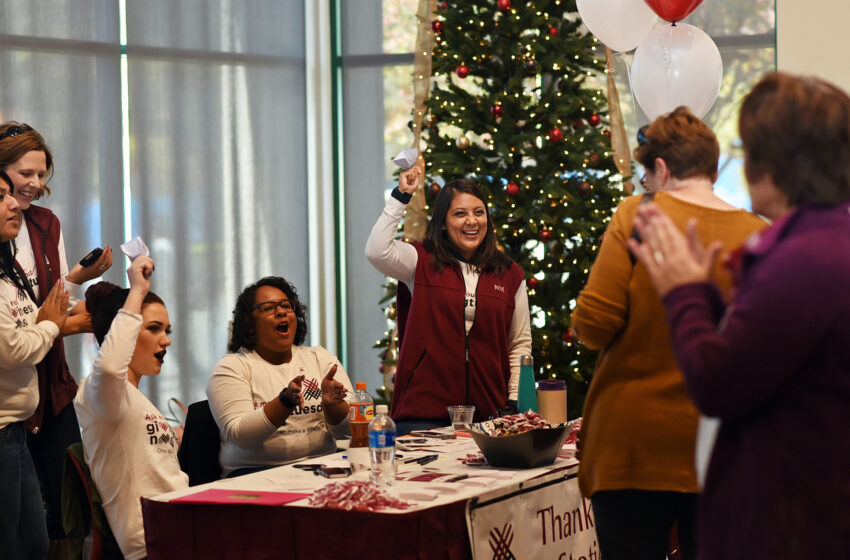 Gifts were still rolling in all evening, but with hours left to go in its one-day GivingTuesday campaign Nov. 29, New Mexico State University had already brought in nearly $2 million in new gifts to support students and programs at NMSU campuses across the state – including two major gifts that got the day off to a running start.

At the 9 a.m. kickoff celebration for NMSU’s second system-wide GivingTuesday event, part of a global day of giving the Tuesday after Thanksgiving, leadership announced a $250,000 matching gift pledged by generous NMSU donors Ammu and Rama Devasthali.

The dollar-for-dollar matching gift will be used to encourage additional contributions to the building fund to replace D.W. Williams Hall.

Later in the day, representatives from New Mexico Gas Company, an Emera company, announced a $200,000 gift to Arrowhead Center, the economic development engine at NMSU, to support programs that create businesses, accelerate technology commercialization and deliver a student entrepreneurship curriculum to communities throughout the state.

In all, more than 1,000 donors contributed to programs and scholarships they loved across NMSU campuses. Dozens of opportunities for matching funds were offered up by donors to drive participation and boost specific funds.

During GivingTuesday, many donors use social media to promote their giving and encourage others to give, so an anonymous donor pledged a $3,500 gift that would be triggered if more than 125 people posted their #NMSUGivingTuesday #UnSelfies after making their gifts – a goal that was quickly surpassed.

“We’re so thrilled that the momentum of last year, when we brought in $2.9 million dollars in new gifts, has kept going through our second-annual event,” said Andrea Tawney, president of the NMSU Foundation and vice president for University Advancement. “This shows the continuing generosity of our alumni, faculty and staff, and businesses in the community and around the region, as well as our committed Aggie family around the globe.”

Final numbers won’t be ready for a few weeks, as the NMSU Foundation accounting staff works to ensure each gift is properly documented and matched, but Tawney estimates the number will climb above the $2 million mark before the night is over.

Chancellor Garrey Carruthers said the day was especially exciting because he got the opportunity to talk to donors about the reasons they wanted to give to NMSU.

“I spoke to one alum who told me about how, eight years ago when he was a student, he benefited from a scholarship that made it possible for him to finish his degree,” Carruthers said. “He was proud to repay the money he’d been given and make the same opportunity possible for another student. It’s just another example of how our caring community transforms lives and motivates our graduates to stay connected to us.”

While GivingTuesday has ended, gifts are welcome year-round, and can be made online at advancing.nmsu.edu. For more information about the NMSU Foundation, visit support.nmsu.edu.