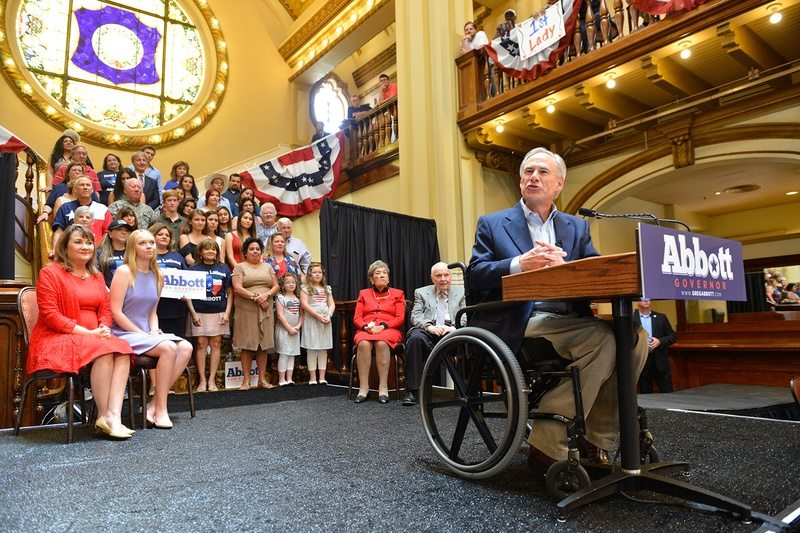 SAN ANTONIO — Warning that “liberals are trying to mess with Texas,” a confident Gov. Greg Abbott promised Friday he’ll fight to keep Texas in conservative hands if voters give him another four years in office.

“Every far-left liberal from George Soros to Nancy Pelosi are trying to undo the Texas brand of liberty and prosperity,” Abbott said, referring to the Democratic mega donor and U.S. House minority leader, respectively. “I have news for those liberals: Texas values are not up for grabs.”

Abbott’s wife Cecilia and daughter Audrey were at his side when Abbott made his re-election bid official at Sunset Station, the historic and beautifully restored train depot in the St. Paul Square District in downtown San Antonio. His daughter introduced the governor to the cheering audience, telling the crowd, “there truly is no place like Texas and no better person to lead it than my dad.”

When Abbott took the stage he quickly began ticking off a list of what he considered his top accomplishments, including a business tax cut, curbs on abortion, more road construction and what he called the “toughest border security law” in the country.

One of the biggest applause lines came when Abbott touted passage of Senate Bill 4, which supporters call a ban on so-called sanctuary cities and detractors describe as a “show me your papers” law because it allows police to inquire about immigration status during any lawful detention, including after a routine traffic stop.

“We finally have banned sanctuary cities,” Abbott said. “It is irresponsible and reckless to release known criminals back out on your streets.”

Lest his supporters get complacent, Abbott noted that Democrats — who haven’t won a statewide race since 1994 — made impressive gains in Harris County in the last presidential election and warned that “liberals think that they have found cracks in our armor.”

“I will not allow big government policies to lead Texas down the wrong path,” Abbott said. “I’m counting on you to have my back.”

Abbott never specifically referred to the special session of the Legislature that begins next week. The governor was forced to call lawmakers back following the end of the 140-day regular session to avoid a shutdown of the Texas Medical Board and a few other agencies that became hostages in a war between House and Senate leaders.

But Abbott, responding to a clamor from conservative activists, did refer to some of the other items he wants addressed — including changes to the property tax system and more curbs on abortion — during the special session. He didn’t talk about the “bathroom bill” that seeks to restrict which bathrooms transgender Texans can use.

But he was asked about it at an event earlier, and he told reporters he wanted the legislation — opposed by major business groups and top CEOs — because of a “tough legal issue” that pits local school policies against guidelines under Title IX, a federal statute that bans discrimination based on gender in schools.

“Obviously I’m pro-business,” Abbott said. “What we have to do is to find a way to make the law and the way that schools operate in the state of Texas consistent with Title IX. That’s one of our objectives during the special session.”

Friday’s kick-off event was held four years to the day after Abbott first threw his hat in the ring — just across the highway from the train depot at La Villita — in 2013. Abbott noted earlier Friday that he again chose his wife’s hometown of San Antonio — and the place where he got married — to ask voters for another four years in office.

Now, like then, he is the runaway favorite to win the state’s top elective office. Now, like then, he is sitting on top of a huge warchest that any rival would struggle to match. And today, just like in 2013, Abbott’s Republican Party is again favored to win every statewide elected office.

“Being as close as we are to the election, Abbott looks extraordinarily strong,” said Austin-based GOP consultant Ted Delisi. “There’s not even a rumor or a sniff of opposition. This is as good as it gets.”

A lot has changed, though, since Abbott took the reins from longtime Gov. Rick Perry four years ago.

The Democrats have been swept out of power in Washington, removing a convenient foil for Republicans. President Trump’s low approval ratings and scandal-prone White House, meanwhile, are creating headwinds for the GOP nationally. And at home, Texas Republicans are as divided as ever, with relatively moderate House members and their leaders battling more conservative Senate counterparts.

So if Abbott has anything to worry about on the political front at this point — and it’s not clear he does — it would be from within his own party as opposed to any candidate the bedraggled Texas Democrats have conjured up so far.

Though firebrand Republican Lt. Gov. Dan Patrick has steadfastly denied any interest in a race against Abbott, talk of a sudden reversal or last-minute betrayal has become something of a parlor game among Austin insiders and lobbyists.

Even if Patrick did take on the governor, though, University of Texas pollster Jim Henson said it would be a tough race for the lieutenant governor. Abbott has the highest approval ratings of any statewide officeholder and Henson said the governor’s numbers among conservative Republicans make him “nearly bulletproof.”

“Patrick is a pretty formidable politician,” Henson said, “but he does start with weaker job approval ratings and less name recognition than the governor does. And he would have to change Republican primary voters’ minds about Greg Abbott.”

Despite the challenges GOP candidates confront nationwide, Abbott has even less to fear from Democrats. With less than five months before the deadline to file for a spot on the primary ballot, no serious Democratic contender has emerged yet in the governor’s race.

Former Democratic state Rep. Allen Vaught of Dallas is looking hard at a statewide run — but not for governor. Instead, he’s thinking about running for lieutenant governor, even though the Democrats already have a serious if little known contender in Houston businessman Mike Collier running for that spot. He said Patrick is a softer target than Abbott.

“I don’t think anybody is unbeatable, but I think Patrick is more vulnerable than Abbott from a common sense point of view,” Vaught said.

Former Democratic state Rep. Trey Martinez Fischer of San Antonio has also been mentioned as a potential Abbott challenger. This week Martinez Fischer told the Texas Tribune he’s “not ruling it out” and has been “talking with party leaders and progressive donors” about a possible run. But it hasn’t moved beyond those conversations into anything concrete.

Fischer did lay out a possible attack line: he said Abbott was “exposed” on the economy, noting that in the land of the “Texas Miracle” the state’s unemployment rate is now above the national average and Texas is slipping in the rankings as the best place to do business.

Abbott is already working to take the sting out of any criticism of economic slippage in Texas. About an hour and a half before his campaign announcement, Abbott toured the San Antonio headquarters of aircraft maker Boeing — which recently announced it was locating its new global services division in Plano — to tout the “growing connection between Boeing and the state of Texas.”

During a brief exchange with reporters, Abbott was asked about a CNBC study of the top states in which to do business. For the first time since the cable network began ranking states, Texas fell out of the top two, and instead placed fourth. Abbott blamed a fall in oil prices but said he’s working to keep the economy diversified.

“Listen, oil got cut in half and Texas is still an energy state and whenever oil prices get cut in half it’s going to be impact our economy,” Abbott said. “The reason why I’m here (at Boeing) is because this is an example of my efforts to ensure that we are expanding jobs in areas that have nothing whatsoever to do with energy so that when oil prices do take the tumble in the future we won’t suffer this type of setback.”

Andy Duehren contributed to this report.

Disclosure: The University of Texas at Austin has been a financial supporters of The Texas Tribune. A complete list of Tribune donors and sponsors can be viewed here.