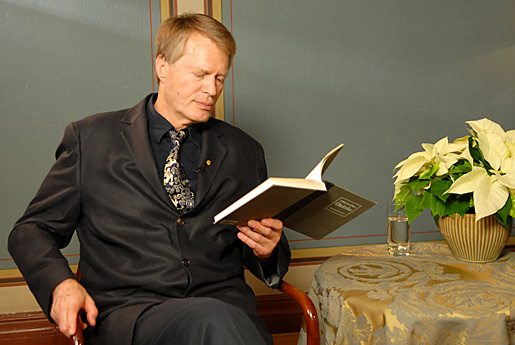 Jean-Marie Gustave Le Clézio, the celebrated Nobel Prize-winning author of more than 40 books, will give a free public lecture as part of The University of Texas at El Paso’s Centennial Lecture Series.

Le Clézio’s lecture, which is sponsored by UTEP President Diana Natalicio and the UTEP Department of Languages and Linguistics, will be conducted in Spanish. Simultaneous English translation will be available. A reception will follow the presentation.

Known for his captivating fiction and complex nonfiction, Le Clézio received the Nobel Prize in literature in 2008, at which time he was recognized as an “author of new departures, poetic adventure and sensual ecstasy, explorer of humanity beyond and below the reigning civilization.”

Le Clézio’s lecture, titled “The Footprints of Mexico’s Literature of Manners,” will focus on the analysis highlighting the main aspects of the Mexican novel of manners. This genre, often loathed by academia, comes to fruition on a border that reflects the distance between two worlds: the academic literature from the capital, Mexico City, and the literature from the provinces.

Le Clézio has ties with Mexico that are evident in many of his works, such as “El sueno mexicano o el pensamiento interrumpido,” “Diego y Frida,” and “La conquista de Michoacan,” which was the topic of his dissertation at the University of Perpignan.

The indigenous influence and the author’s own experience in Michoacán will be among the topics to be discussed at this lecture. Le Clézio will discuss moments that have had the greatest impact on contemporary Mexican literature.

The Centennial Lecture Series invites noteworthy speakers to the UTEP campus to share their perspectives on a broad range of contemporary issues that are likely to impact our society, culture and lives in the years ahead.

What: Centennial Lecture: “The Footprints of Mexico’s Literature of Manners” by 2008 Nobel Laureate for literature Jean-Marie Gustave Le Clézio