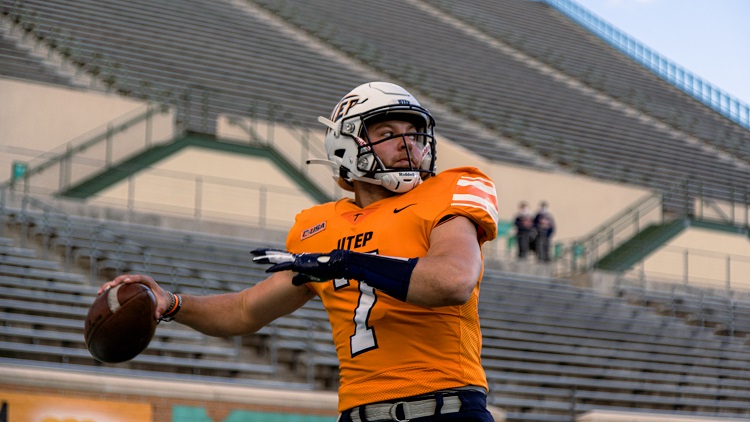 DENTON, Texas –  Jaelon Darden reeled in eight catches for 173 yards to become North Texas’ all-time receiving leader, as the Mean Green came from behind to beat UTEP, 45-43, on Friday night in Denton.

Darden scored four times, including the go-ahead TD with 8:06 to play in the third quarter, as North Texas (4-5, 3-4 C-USA) foiled a gallant effort by the undermanned Miners (3-5, 0-4 C-USA) in the season finale for both teams.

Calvin Brownholtz made his first career start at quarterback for the Miners as Gavin Hardison was unable to play and did not make the trip.  UTEP was also decimated in the secondary with five key players out, including four starters who entered the transfer portal earlier this week.

But their absence fired up the Miners, who took a 7-0 lead on a 29-yard rushing TD by Brownholtz midway through the first quarter.   North Texas knotted it up on a 46-yard pass from Austin Aune to Deonte Simpson with 2:38 remaining in the period.

Two rushing TD’s by Deion Hankins in the second quarter lifted UTEP back into the lead at halftime.  He scored on a two-yard scamper at the 14:23 mark, and again with 43 seconds left after the Mean Green went ahead 17-14.  The Miners took a 21-17 lead to the locker room.

But the third quarter was dominated by North Texas, as Aune connected with Darden for a 32-yard score to regain the lead, then added a four-yard rushing TD of his own to push the lead to 10 (31-21).

The Miners got within three (31-28) on a 28-yard TD pass from Brownholtz to Jacob Cowing early in the fourth quarter, before Darden put it out of reach with his third and fourth touchdown of the night.

Brownholtz rushed 15 times for 114 yards, including a five-yard TD with 26 seconds left to pull UTEP within two (45-43).  North Texas recovered the onside kick to preserve the victory.

The Miners piled up 301 rushing yards, as Hankins finished one-yard shy of 100 and Ronald Awatt added 79 yards on the ground.  Cowing snared five catches for 118 yards, including 106 in the second half.

Aune completed 16-of-29 passes for 302 yards and five touchdowns.  Simpson joined Darden over the century mark with 103 receiving yards.

The loss capped a much-improved campaign for UTEP, which tripled its win total and was competitive in three of its four C-USA losses.

For complete coverage of UTEP Football, follow the Miners on social media at @UTEPFB (Twitter/Instagram) or visit the official home of UTEP Athletics at UTEPMiners.com.