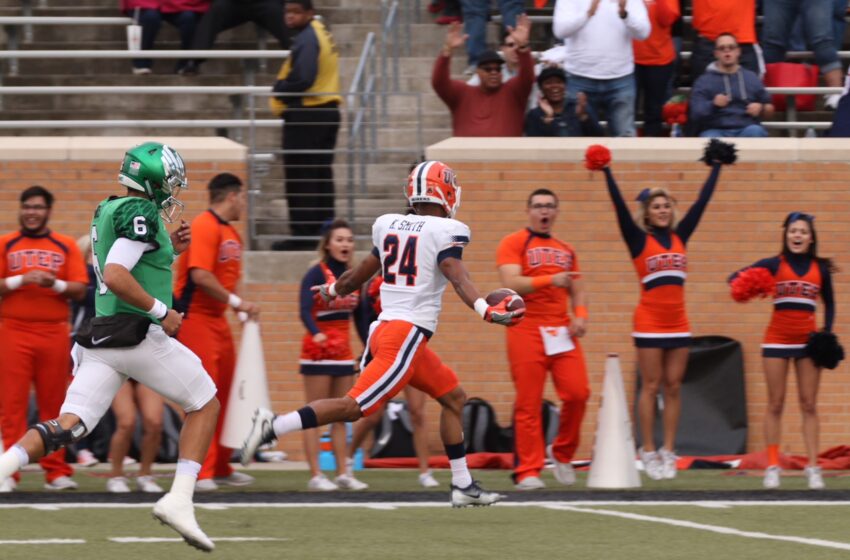 But after the Miners battled in the first half, finding themselves down 14-7, the Mean Green outscored their opponent 31-3 in the second half.

“I thought we, particularly on defense, played really well in the first half,” interim UTEP head coach Mike Price said. “But again, we couldn’t get anything going on offense. We still had a chance at halftime, but we aren’t a very good second half football team.”

The contest started positive as the Miners took a 7-0 lead early in the first quarter when senior Alvin Jones forced his third fumble of the season. Junior Kahani Smith scooped up the loose ball and returned it 45 yards for a touchdown to quiet the raucous crowd of 26,108. It was Smith’s second touchdown of the season and the third overall for the UTEP defense in 2017.

The Mean Green, however, answered as Fine and Jaelon Darden gave the Mean Green a 14-7 lead. The first score came with 48 seconds remaining in the first quarter when Fine tied the contest on a 13-yard pass to Darden. After a tight second quarter, UTEP was called for a passing interference that put the ball at the two-yard line. Fine hooked up with Darden for a second time on a short toss with just over two minutes remaining the in the first half.

The UTEP defense got off to a sluggish start in the second half as North Texas opened the half with a 75-yard scoring drive on eight plays that resulted in a Wilson one-yard touchdown to make the score 21-7.

The Miners helped the Mean Green with 31 penalty yards on the drive. The first penalty came on a facemask after Wilson gained 10 yards on the first play of the drive. Two plays later, the Miners were called for a roughing the passer that moved the ball to the UTEP 31-yard line. Prior to Wilson’s score, a passing interference was called in the end zone to set up the short run.

“We started out the third quarter on defense and got three penalties and gave up 75 yards,” Price said. “The defense wore down in the second half and we didn’t make any plays on special teams. It was a tough loss to a good team.”

The offense showed signs of light after UTEP scored on its first possession of the second half. Zack Greenlee, on a first-and-10 from the UTEP 39, threw up a jump ball as he was being rushed only for Warren Redix to come down with it against a pair of defenders for a gain of 34 yards to the North Texas 27-yard line.

Following an incomplete pass, Greenlee used a career-long 15-yard dash to get to the 12-yard line after almost being sacked. But the Miners could only muster up three more yards and settled for a Jason Filley 27-yard made field goal attempt (21-10).

With the score 28-10 after a Rico Bussey 60-yard touchdown pass from Fine, the Mean Green put the game away to begin the fourth quarter after Fine completed his fourth touchdown pass, this time to Jalen Guyton on a two-yard toss, giving North Texas a 35-10 lead.

Smith had a nice game as he registered a career-best nine tackles to go along with his touchdown.

“Smith has played well the whole year,” Price said. “He made some big plays for us.”

Fine was effective as the sophomore finished 23-of-35 passing for 213 yards (154.5 rating) and Wilson racked up another 58 yards on seven receptions to go with his 144 rushing yards. Bussey led the Mean Green with 65 yards on three catches.

UTEP will host LA Tech on ‘Senior Day’ to close out the home portion of its schedule. The Nov. 18 kickoff is set for 1 p.m. in the Sun Bowl, as 22 seniors will play their final contest in the Sun Bowl.