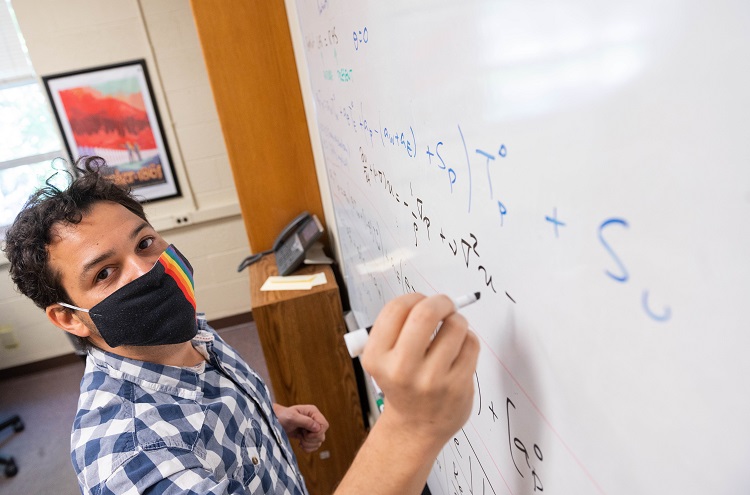 Wladimir Lyra, assistant professor of astronomy at New Mexico State University, received a three-year grant from The National Science Foundation and NASA to collaborate with other universities to pursue research on how planets form. | photo by Josh Bachman/NMSU

“This investigation will use powerful computers to produce simulations of planet formation and compare the results with modern observations,” said Lyra. “This research will be able to decide which models are more likely to account for planet formation.”

Lyra explained the project will be the largest collaboration of theoretical planet formation in the United States. NMSU is working with the University of Arizona; the University of Nevada, Las Vegas; Iowa State University and the SETI (Search for Extraterrestrial Intelligence) Institute.

“Earth is essentially a ball of dust,” Lyra said. “We want to know how planets are formed around the sun. One of the clues is that even though space is three dimensional, the solar system is mostly flat like a pancake: all planets orbit the same plane. The easiest way to achieve this configuration is if planets form from a disk around the Sun. And the fact that Jupiter and Saturn are made mostly of gas implies that this disk was a disk of gas. If we want to understand planet formation, we need to understand the behavior of these disks of gas around young stars.”

“An ubiquitous process in gas is turbulence. Yet, turbulence is the last unsolved problem of classical physics,” he said. “We can’t exactly predict how turbulence acts in the future. This is because turbulent systems are chaotic, which means that the system is very sensitive to initial conditions. It has led to the often-mentioned notion that a butterfly flapping its wings can whip up a hurricane.”

It’s that unpredictable motion of how the gas and dust form planets that Lyra and his collaborators are trying create a model for using supercomputers.

“When sun shines in your room, sometimes you can see the particles in the air and the motion is random and turbulent,” Lyra explained.

“The same thing happens in space. We quantify for this computationally. The dust is where planet formation comes in. Like the dust in your room, the disks around young stars also have dust in them. The dust first concentrates into dust bunnies, and then keeps growing larger and larger until you have pebbles and rocks made of these dust bunnies The problem is that you need to find a way to collect these pebbles and rocks and form a planet out of them.

“That is not going to happen by itself, because pebbles are too small to attract other pebbles. They don’t have enough mass to attract each other, but the turbulence allows them to come together, collapse and form a planet.”

Over the past 10 years, researchers in the field have observed motions in the discs forming around young stars that resemble forces like the hurricanes we see on Earth.

“These vortices are very good at concentrating dust,” he said. “Right now, we’re running a model on the computer that shows that the concentration of pebbles in one of these hurricanes is able to reach the density necessary for collapsing them into planets.”

Lyra’s research is focused on finding ways to generate turbulence in gas disks around young stars. He says that there are many possible routes for turbulence. Too many, in fact, for him to work on alone, which is why there is a collaboration between different universities. Each node of the network collaboration will study one of the processes and how they work to concentrate dust to form planets. Ultimately, they will combine their research to come up with a unified theory.

The project also has an educational component focused on underserved teenagers in the region, with a goal is to inspire them to pursue higher education. Lyra and his team will develop a science camp where students are taught reasoning skills and learn about astronomy. The project plans to reach out to Hispanic teens living below the poverty line in the Las Cruces area.

Lyra began such a program when he lived in Rio de Janeiro while other colleagues continued it in Nigeria and Bangladesh. Now that schools have reopened in Las Cruces, he plans to approach schools in this region. In three years, he believes he can reach a significant percentage of Las Cruces’ Hispanic teenagers.

“If you ask a scientist why they chose their career, more often than not, it was one event, one moment when their horizons were broadened,” Lyra said. “Maybe one watched a rocket launch for others it was a movie. I got interested at age 5. I saw a drawing of the solar system and that got me hooked. From that moment on I wanted to know everything about it. These events can lead to life-long interest. That’s what we want to replicate by inspiring these kids with interesting science.”