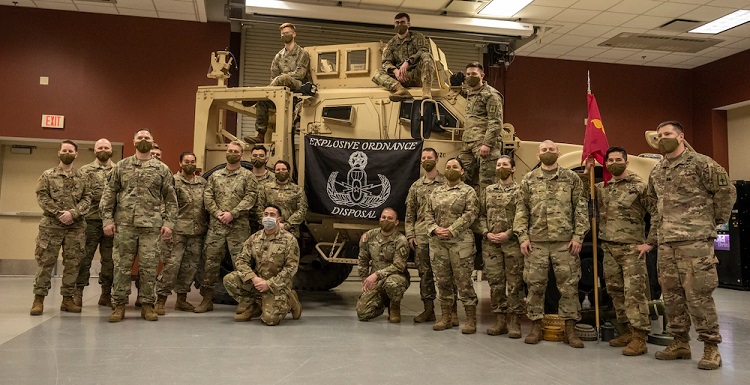 Soldiers of the New York Army National Guard’s 1108th Ordnance Company (Explosive Ordnance Disposal) pose for a group portrait during their deployment ceremony conducted on February 13 at the Armed Forces Reserve Center in Glenville, New York. The Soldiers will be deploying to the Central Command area or responsibility after training at Fort Bliss, Texas. | U.S. Army National Guard photo by Sgt. Matthew Gunther

The Soldiers departed for Fort Bliss, Texas on Valentin’s Day, February 14. They will train there for 30 days before deploying to the Middle East.

The company’s Soldiers specialize in dealing with improvised explosive devices, and disposing of unexploded bombs, grenades, and shells.

The explosive disposal experts will be part of Task Force Spartan Shield, the U.S. Army force in the region which is headquartered in Kuwait and operates across the U.S. Central Command area of responsibility.

The unit is expected to serve for nine months in the region. They will be on federal orders for a year. This includes leave at the end of the deployment.

Because of the specialized nature of the unit, members range from across New York, as well as Ohio and even Florida.

Due to COVID-19 meeting restrictions, the Soldiers family members watched the farewell ceremony on a computer live stream.

“I have watched you all train and train to get where we are and prepare for what lies ahead, and I promise I will always give you my maximum effort as your leader,” said Capt. Ryan Ripley, the company commander.

Addressing the families during the ceremony, Ripley added: “This success would not have been possible without the countless sacrifices and endless support of our friends and families, thank you.”

Ripley, a Farmingdale resident, has led the company since 2019. He is a veteran of the War in Afghanistan and in civilian life is a New York Police Department bomb technician.

Major General Ray Shields, the Adjutant General of New York, and Lt. Col. Douglas Baker, the commander of the 501st Ordnance Battalion, the 1108th’s higher headquarters, spoke at the ceremony, as did Command Sergeant Major Marc Maynard, the senior enlisted leader for the 153rd Troop Command.

All three leaders expressed confidence in the Soldiers and their abilities.

“I know how difficult EOD school is, how small and close knit this unit and the EOD community is, and I have no doubt you will bring that expertise and comradery with you on your deployment,” Maynard said.

The 1108th Ordnance Company (EOD) deployed to Iraq in 2010 and has trained in Rwanda and with the New York State Police.