President Barack Obama spoke about civic engagement in a digital age at Austin’s South by Southwest on March 11, 2016. | Photo by Bob Daemmrich / Pool

Texas’ Republican leadership has stifled voter turnout, and the public sector should do more to encourage online voting and other civic engagement, President Barack Obama said in an interview Friday with Tribune CEO and Editor-in-Chief Evan Smith.

Obama’s remarks at the South by Southwest Interactive festival in Austin focused on using Internet technology to encourage more civic participation, including voting.

“It is much easier to order pizza or a trip than it is for you to exercise the single most important task in a democracy, and that is to select who’s going to represent you in government,” the president said.

That law exists “because the folks who are currently governing the good state of Texas aren’t interested in having more people participate,” he said.

Texas has found itself at the center of controversy over voting rights, facing criticism from the left over the state’s voter ID law. That law is currently tied up in court after a federal judge ruled it had a “discriminatory effect” by restricting access to the polls for black and Hispanic Texans. The law requires most citizens to show one of a handful of forms of allowable photo identification before their election ballots can be counted.

Obama called for bringing government and private technology companies together to streamline government services and elevate their standing in libertarian-minded states such as Texas.

“Look, Texas is never going be an early adopter of what I’m talking about here, but over time, pressure builds for us to create systems that make government more responsive and make it work better,” he said.

The president said his office was working to create a “pipeline” to recruit tech-minded talent to the federal government. He said he hoped to encourage skilled workers to pursue endeavors that would improve government services.

“In an age in which people are getting information through digital platforms, through the Internet, where people’s attention spans have shrunk, it is critical that all of you who are shaping this environment are spending this time thinking about how are we getting citizens engaged,” he said.

Obama conceded the botched rollout of the website Healthcare.gov in 2013 was an “embarrassing” moment for his administration. But he said the White House called in a “SWAT team” of skilled workers from technology companies to help fix the website, which people use to purchase subsidized health insurance under the Affordable Care Act, the president’s signature health care law. Obama touted that effort as a successful example of collaboration between the public and private sectors.

One of the lighter exchanges of the interview came after Obama said he had been able to lower the unemployment rate while president. He then paused for a moment before giving the punch line from a popular joke on social media: “Thanks, Obama.”

Asked about the current dispute between the Federal Bureau of Investigation and technology firm Apple over the government’s access to a person’s private data, Obama declined to comment on the case but said he doesn’t want government “looking through everybody’s phones willy-nilly.”

That dispute centers on whether Apple must comply with a court order to help the FBI unlock an iPhone used by one of the shooters in last year’s San Bernardino, California, attack that left 14 people dead.

The president spoke at length about the need for government to balance security and privacy. He cautioned against taking an “absolutist view” on the issue, saying, “There has to be some concession to the need to be able to get into that information somehow.”

“If your argument is strong encryption no matter what, and we can and should in fact create black boxes, that I think does not strike the kind of balance we have lived with for 200, 300 years, and it’s fetishizing our phones above every other value,” he said.

Outside the interview venue, several hundred onlookers gathered to watch the president’s motorcade arrive and leave.

Among them was Erika Washington, 38, who was visiting Austin from Dacula, Georgia, for SXSW.

“The excitement just rushed through my body,” Washington said. “You could see him waving in the window. I consider myself a sane person, but seeing President Obama in person, I just lost it. I was so excited.”

The SXSW appearance was one of several stops during Obama’s afternoon visit to Austin. After arriving at Austin-Bergstrom International Airport, he stopped by a South Austin Torchy’s Tacos location with Mayor Steve Adler. Inside, he took photos and ordered three tacos — one named the Democrat, one named the Republican and one named the Independent. He also ordered Adler a green chile pork taco.

After the interview, he spoke at a Democratic National Committee reception at the downtown Austin Music Hall.

Outside, a few dozen University of Texas students and community members protested the president’s lack of action on immigration reform.

“Obama has made some progress, but it’s not enough,” said Mizraim Belman, a 17-year-old student at Crockett High School in South Austin, who immigrated to the city from Mexico when he was four.

The president was to speak at a private reception in a Tarrytown home and then fly to Dallas, where he was scheduled to spend the night.

Additional reporting by Patrick Svitek and Jamie Lovegrove. * Editor’s note: This story has been updated throughout.

Disclosure: Steve Adler is a major donor and former board chairman of The Texas Tribune. A complete list of Tribune donors and sponsors can be viewed here. 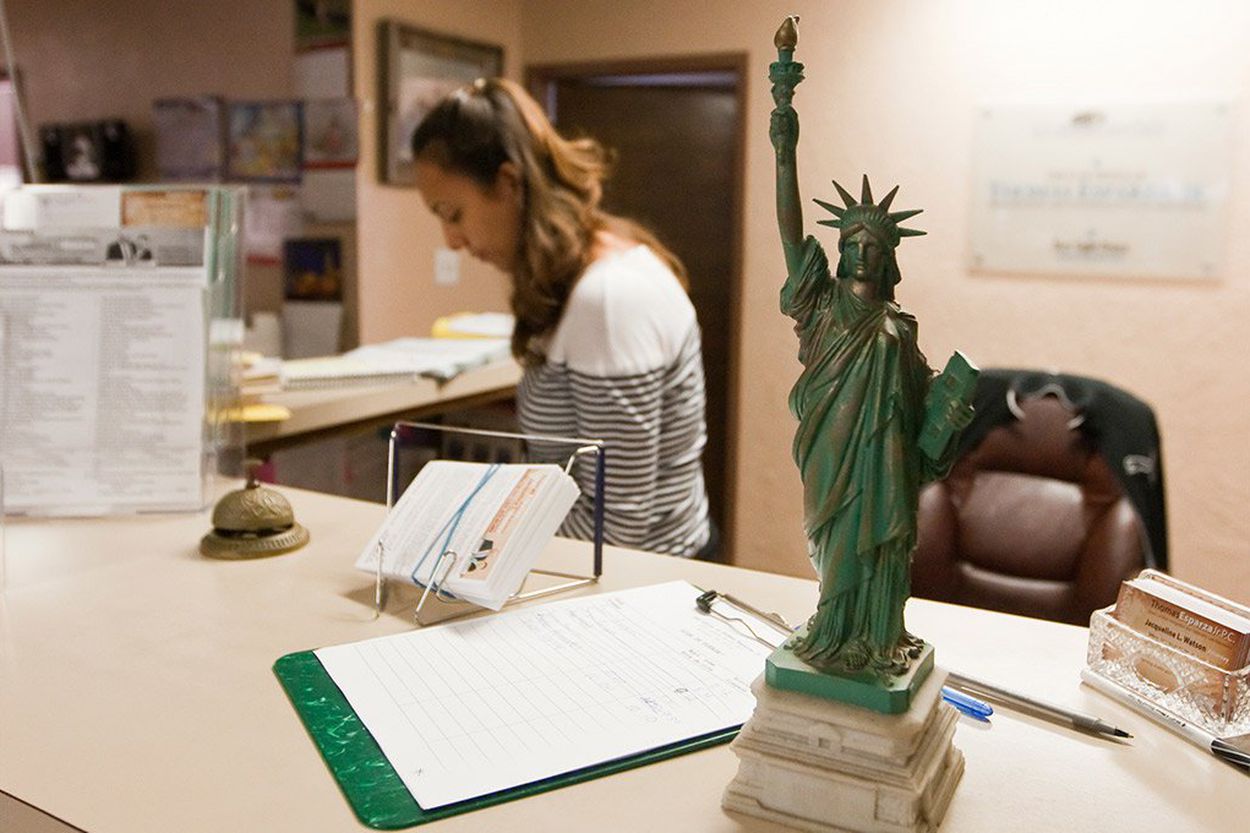